Had a very enjoyable afternoon - evening - night guiding yesterday. Met up with a mixed international group (Sweden, Denmark, Germany, France and Belgium). On the way down to the Rift Valley i intercepted a huge raptor migration stream - I had to stop and watch for a couple of minutes though I was almost late. Had a couple of thousands of buzzards, with some eagles etc.
Down at neot hakikar we had a really good and relaxed hour before dusk with a nice selection of migrants and resident species - Whinchat, Wryneck, Garganeys, Marsh Sands, Montagu's Harrier, several Clamorous Reeds etc.
After dusk we had good views of Nubian Nightjars, enjoyed by all clients.
After a quick coke stop we headed into a wadi in the Judean Desert. It took us some time but eventually we had great views of a male Hume's Owl, calling and flying. No matter how many times I've seen this bird before, each encounter is truly magical with the combination of desert, moon, sounds and sights. Unfortunately, I'm the one who normally holds the torch during these encounters, so also yesterday I was unable to get an image of the owl. This image is from previous years from the same place, perhaps the same bird. 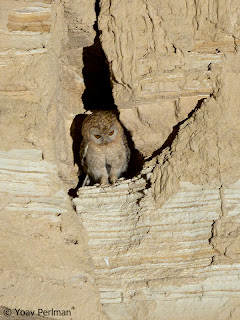