In the last 48 hours I did too much birding and had no sleep at all. So this is how it went: yesterday afternoon met up with Ian & Margaret from UK. We birded first at Lot Reservoir which was again very procuctive. Good breeding activity of Dead Sea Sparrows, three singing Clamorous Reed Warblers, Ferruginous Duck etc. Very birdy there. 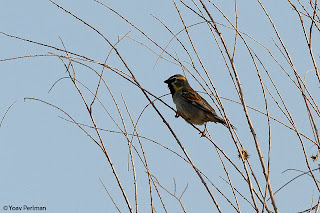 After dusk we had good nightjar activity with several singing males and good views of birds on the deck and in flight.

Got back home just before midnight, and discovered that I had a guard duty in my village. F@#k! I was dead tired but managed not to fall asleep somehow. Finished that at 3 am, and headed off to Ashdod. I met up with Arad very early - we planned to set nets up for shorebirds and crakes. Our heroic effort was fruitless and we caught our first passerines only at dawn. When there was enough light we noticed tons of crakes running under our nets, of all three species, including a stunning Baillon's Crake, but none got caught. 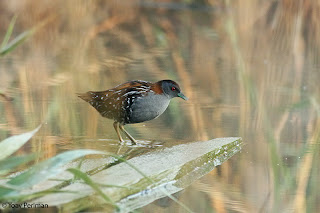 Only later on a Water Rail got caught. But after a disappointing start it turned out to be a very good morning - good catch and great variety. Good numbers of Lesser Whites, Blackcaps and Reed Warblers, and other species included Masked Shrike, Savi's Warbler, Willow Warbler, Redstart, and many more. 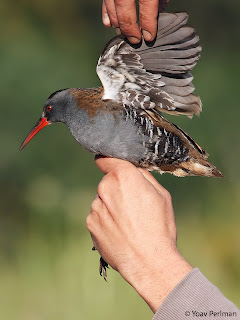 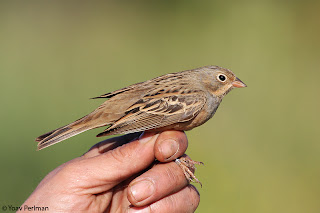 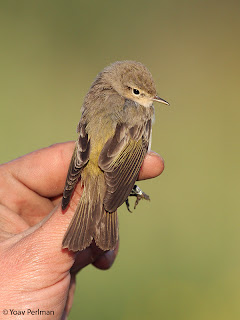 Alien or not - Common Mynas are lookers! Check that eye! 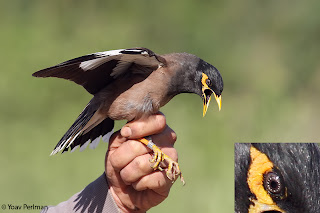 Other species seen but not caught were Jack Snipe, Little Bitterns, and many Tree Pipits.
Many thanks to Arad, Miriam and Roie for their help.

In the evening news arrived of a Grey-headed Gull reported at Eilat! This is one of my serious blockers - I saw one in 1989. So I am not sure whether I want it to be relocated tomorrow or not... No, just kidding, good luck to Eilat birders tomorrow, unfortunately I can't make it down there before Sunday.
פורסם על ידי Yoav Perlman ב- 8:40 PM