It ain't over yet

Our locust wars are not over yet. More locust swarms entered yesterday from Sinai to the sand dune area north of Ktziot. They were sprayed with a pesticide of the Peritroid family. Billions of dead or dying locusts are spread over a huge area.Yesterday Amir Balaban found three dead storks in an area with tons of dead locusts. He examined their stomach contents in the field and found them stuffed with locusts. We haven't received the toxicology results yet, but I can only guess that they died of secondary poisoning. During the last few days we observed many different birds feeding on dead locusts - Cream-coloured Coursers, Steppe Eagles, Steppe Buzzards, White Storks, Brown-necked Ravens. It is very difficult to find poisoned birds in such a huge area, but we will keep looking. We are working hard to prevent further spraying in these sensitive habitats, but the ministry of agriculture, responsible for the spraying, shows little interest in our concerns regarding the potential impact on these habitats. This is how huge areas look like:

Today we organized a few teams to scan large areas on foot and with 4X4's, to look for poisoned birds and flush storks and eagles landing to feed in this area. I worked in an area where there is normally a territory of MacQueen's Bustards. This area was sprayed on Wednesday, though no locusts made it to that specific site. This morning the site had almost no bird activity. We found lots of dead insects and saw no live insects and arthropods. I had one bustard - it looked OK, but I guess it will have no food to feed its young. I searched a larger area later on, and eventually we saw some stuff. Some flocks of White Storks, but none on the ground: 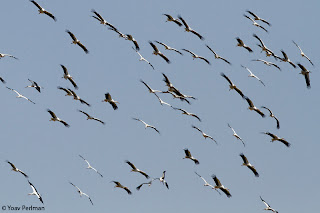 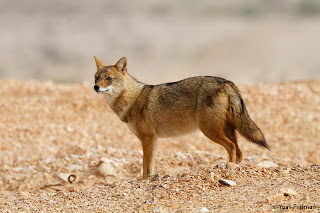 Rock Doves are in fact on Israel's red list due to mixing with feral pigeons. In remote parts of the deserts genuine-looking doves can be seen. I think I have never photod a Rock Dove before. Good looking birds to be honest. 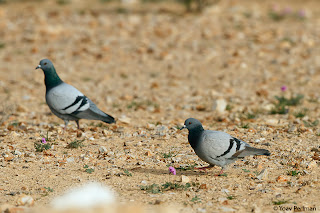 Some migrants around, especially wheatears and Woodchat Shrikes: 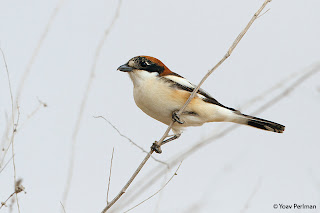 Other birds seen were some Hill Sparrows in several sites (breeding invasion began), some singing Lesser Short-toed Larks, and a male Pallid Harrier.