Yesterday a huge swarm of Desert Locust (Schistocerca gregaria) entered Israel from N Africa via Sinai. The swarm was about 12 km long. They landed north of Nizzana, in the sand dunes north of Ktziot. This morning I headed down there to watch the spectacle, and perhaps find an Abdim's Stork or something else following the food from Africa. While driving down I learned from the radio that Ministry of Agriculture operated some crop dusters to spray the swarm with insecticides. However this activity was done in highly sensitive habitats, where rare birds such as MacQueen's Bustards breed. I started making some phone calls and in the end I think I succeeded to communicate with the ministry officials and explain the sensitivity - I organized a meeting in the field in which we expressed our concern over spraying pesticides over such a large area during breeding season.
When I arrived the locusts were still on the ground, only later some started flying. It was a cold day with strong wind, so eventually the remaining locusts that survived the pesticides didn't go very far. This is an impressive wildlife phenomenon. We get such events in Israel about once every 10-15 years, but this swarm is one of the largest ever recorded in Israel. At the moment the locusts are mostly in their juvenile red phase. Only few are yellow adults, that are the more hungry and harmful form. 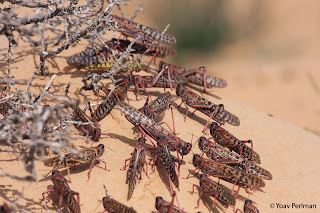 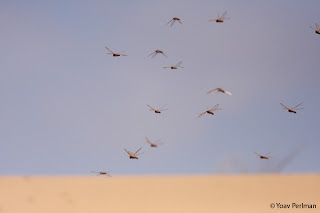 In the afternoon Meidad found a flock of 20 Hill Sparrows near Ezuz. Went over and had a quick look. I really love them. They were already singing and displaying; wonder whether they stay and breed. Habitat looks very good there (hope it doesn't get sprayed). 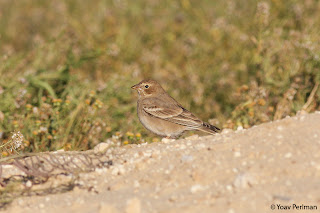 While driving with Amir through the sand dunes we found some nice concentrations of Negev Iris Iris mariae. 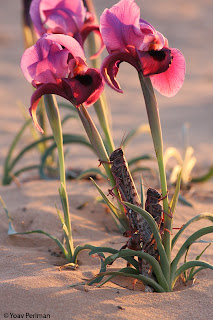 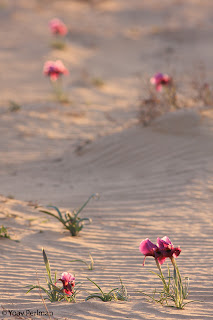 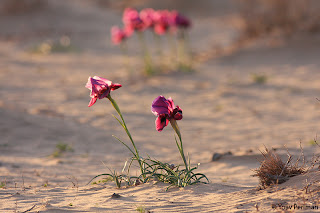 Thanks to all the people who helped with the work in the field today - Meidad, Amir, NPA rangers, Yoav Motro and many more.