Last night I was on guard duty in my village. Had several singing Scops Owls and found this one sitting on a wire. Had only my small lens (400/f5.6) with me, no tripod and no torch. This image was taken single-hand-held; in my other hand I was holding my phone using the built-in torch to get some light on the bird in order to focus. Used the built-in flash. Exposure was 3.2 seconds long! I have no explanation how it came out reasonabely sharp. Also cannot explain the phantom owl to the left... 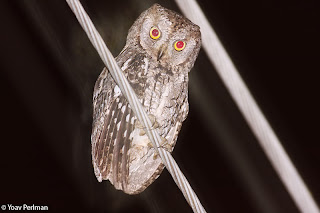 Yesterday morning I ringed at Ashdod after I hadn't visited the site the whole winter. A huge flood in January destroyed much of the vegetation, and dumped loads of mud everywhere. Water level was too high, but still I waded like a bloody hippo the whole morning. Rather few birds and strong wind made the whole morning not too much fun. Still about 40 birds, some Chiffchaffs, Lesser Whites, Bluethroats etc. Only bird worth a photo was a Penduline Tit but I was coated in mud so couldn't be bothered to get the camera out.
Thanks to my muddy helpers - Arad, Liad, Shlomo and Miriam.
פורסם על ידי Yoav Perlman ב- 12:51 PM