Migration is peaking now in Israel. The weather is still quite awful - midday temperatures soar into the mid 30's, but the early mornings offer some respite and are pleasant enough for birds and for birders. I keep going out birding every morning, even now during our second lockdown. I have fieldwork to do, and anti-poaching duties, which thankfully keep me outdoors.

The fields and reservoirs near home are packed full with birds, offering some hope that we have not screwed the world up completely, yet. Often, early morning birding sessions end up with an impressive tally (check this representative checklist for example). Willow Warblers numbers are very low, but other species groups seem to be doing OK - shrikes, buntings, chats. Young Lesser Gray Shrikes are seen in numbers now - very neat birds: 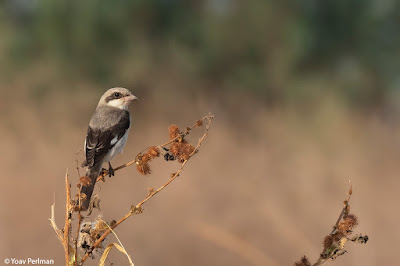 Numbers of Cretzschmar's and Ortolans and even now - Cretzs still around in force: 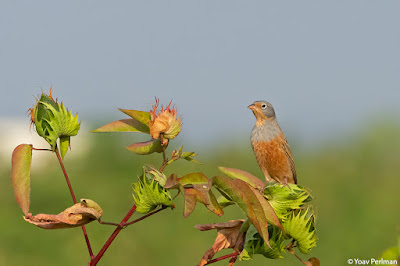 Raptor migration is very prominent now. Luckily, I live on the main highway. Unlucky for me, I need to spend most hours of the day working indoors - wish I could sit outside all day with a cold beer and stare at the skies. However, every time I stick my head out of the air-conditioned house between 10:00 and 15:00 and look up there are convoys up in the sky, of Lesser Spotted Eagle, Levant Sparrowhawk, Honey Buzzard, Black Kite and many other species (check this checklist for example).
Lesser Spotted Eagle and two levants 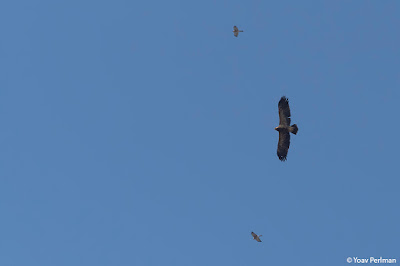 Part of a flock of 800 Levant Sparrowhawks 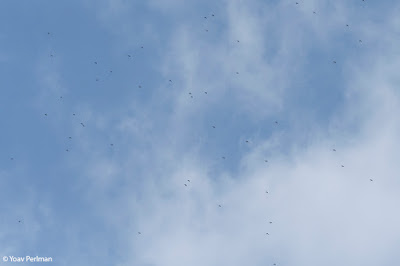 It's a good time of year for shorebirds too. A visit to Ma'agan Michael offered good views of Bar-tailed Godwits - scarce in Israel: 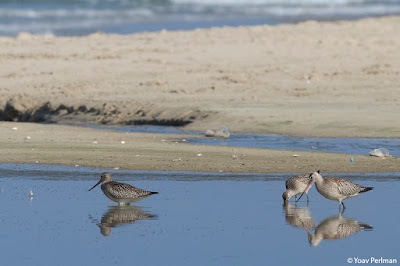 Gan Shmuel fishponds hosted a Pectoral Sandpiper - I had to go and visit. 15th for Israel, I have seen a few before but always nice to connect with:
Pec Sand with friends 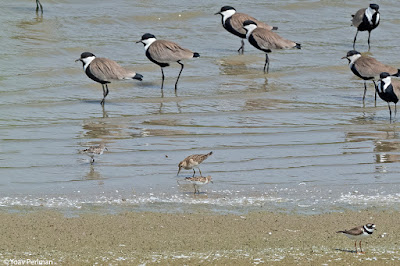 Best bird I found recently was yesterday - while birding with Piki in Tal Shachar (good fun!) we flushed a snipe from under our feet - it gave a familiar call, taking me back to November 1998 - Pin-tailed Snipe! In flight we noticed that there was no trailing edge, it was stocky with a short bill, but if flew away and out of sight. Sadly no photo but satisfying birding moment! We couldn't relocate it - hope it shows up again.
Sadly, not all of my work includes happy birding moments. On Friday I was called to retrieve a transmitter of a dead Bonelli's Eagle not far from home, and asses the cause of death. No need for detective work to make this assessment:
פורסם על ידי Yoav Perlman ב- 2:53 PM No comments:

On Monday I left home too early, to make it on time to a boat trip out of Eilat. At first light, while cruising through Hameishar Plains, I noticed a lovely herd of Onager by the road - had to stop and film them quickly. It was really dark; only on the computer screen I noticed there were some birds in the frame too - a Woodchat Shrike, and perhaps another shrike in the foreground: 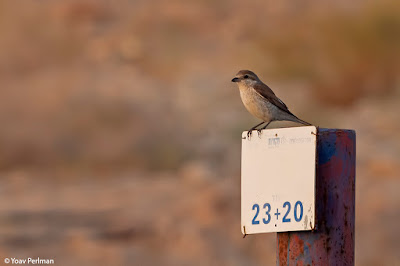 I met up with Noam at IBRCE, where I parked my car as we had arranged to drive together to the dock where our boat was moored. When I stepped out of the car, Noam walked towards me out of the ringing hut smiling from cheek to cheek, holding a bird. Menetries's Warbler! Fantastic bird, extremely early (they're even rarer in autumn than in spring, usually in November), perfect timing for me... Time for a quick snap, under pressure, we had to shoot off; wrong camera settings and harsh light make the tail look less pitch-black and overall more warm-toned than it was in real life. 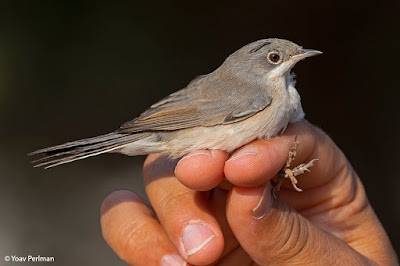 Then it was time for the main show. I joined the monthly pelagic monitoring trip, organised by INPA and IBRCE. On the boat were INPA's Chen and Eran, and IBRCE's Noam and Iris.We set off from Eilat at 08:30, and headed out towards our regular spot, as close as possible to the border triangle Israel - Egypt - Jordan. Strong northerlies made the sea relatively rough (not like southern ocean rough, but there were white crests), which made scanning rather challenging. We spent over three hours chumming, nada. Nothing came in to check the chum, and there were no seabirds around us at all. As we started talking about a pack-up and retreat, suddenly a storm-petrel was spotted fluttering over the slick, out of nowhere. It spent few seconds over the slick, about 50 m away, good light conditions. It showed a small size and big white rump extending down to undertail coverts - Wilson's Petrel! It happened all too fast for any photos to be taken, sadly. The storm-petrel then continued south and landed on the water, too far to get any details on it. We tried to edge towards it, but were immediately called out by the navy, warning us not to drift across the border. We waited for a while, hoping the bird would return to check the slick, but it didn't and we lost contact with it.

Wilson's and I have a bit of history together. The first record for Israel, in 1983, was before I started birding. Then 33 years of nothing, until in September 2016 Noam blasted with a fantastic record. In 2017, another tasty record, this time two were seen. During these years I lived in the UK, and watched with envy my friend's lists growing. These records suggested that Wilson's Storm-Petrel (and Swinhoe's) is a regular summer/autumn visitor to the Gulf of Aqaba. In 2018, shortly after my return to Israel, I tried a couple of times. Blank. In 2019, again, nothing, 'just' a Swinhoe's. July 2020 - again, a single bird recorded by Noam and INPA, photo by Gal Marinov:

In August one more try - swinhoe's again but no wilson's. I didn't give up, and I'm glad I didn't - finally Wilson's Storm-Petrel is on my list.

We returned to shore, Noam smiling from cheek to cheek for the second time that day. It became very hot (43 ⁰C), I was very tired and wanted to get back home. Despite these, KM20 saltpans lured me for a quick check. I did not regret. The pans were exploding with shorebirds - best form I have seen them in many years. Many thousands of shorebirds, huge numbers of Little Stint and Ringed Plover, several more species in impressive numbers, quality in the form of two Terek Sands, four Black-winged Pratincloes, six Broad-billed Sands, a Red-necked Phalarope - very good fun. I wish I had more time in better conditions - not easy to quickly pick up a semiP in strong wind and scorching heat. Next time. ebird checklist here. 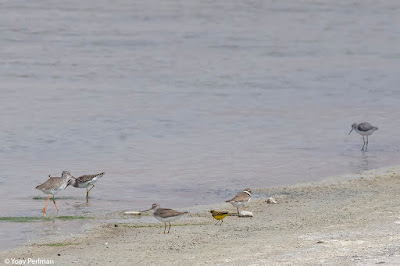 Thanks agaim to Noam, Iris and IBRCE team, and to Eran and Chen of INPA - I wish us all many more successful days like this one.

This morning I paid a mandatory visit to the returning Pacific Golden-Plover in Tel Aviv (needed it for my yearlist...). This individual returned a couple of weeks ago for its fourth winter - in previous years it stayed until March. Over the years it has become so tame and tolerant to humans - it just stood there. Beautiful bird.

Before the sun was up 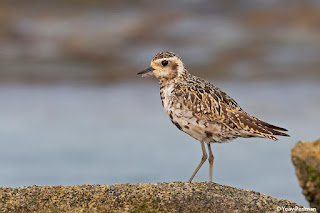 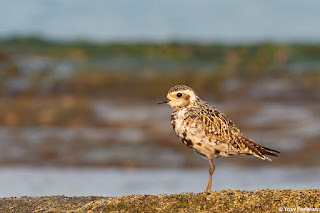 I checked the nearby coastal scrub strip for migrants. There were some shrikes, wheatears, whinchats etc. - nice selection but small numbers.

eBird checklists for beach and scrub.

Taken in Haifa a few days ago, early morning during a family holiday. I spent a few enjoyable minutes during the golden hour, as it fed on inverts in rockpools.

Greater Sand-plover is a rather common non-breeding visitor to coastal Israel, seen mainly on rocky strips. They arrive back from their rather near breeding grounds (as close as Syria, apparently) already in late June, and stay with us until late May. In August they're already in full non-breeding plumage, which is a good ID feature vs. Lesser Sand-plover. As are its green legs. 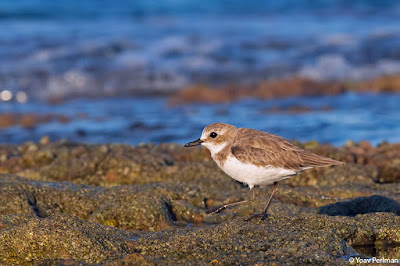 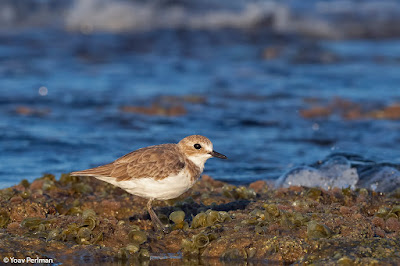 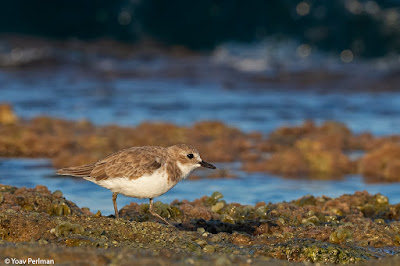 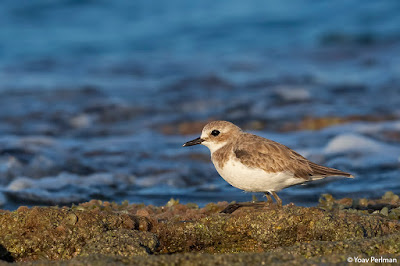 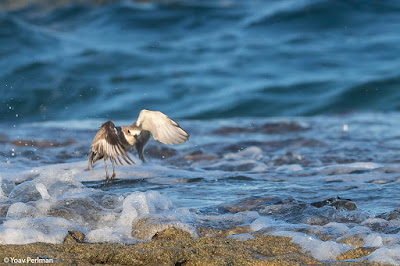