This morning I led a tour for the festival. We started off at the IBRCE. On the lagoons we had some gulls and shorebirds, and a Caspian Tern. At the ringing station it was very very slow, but still we had a nice selection of migrants, including one Balkan Warbler. Thanks to the ringing team for their efforts and for not wearing pink T-shirts today.
Then went up to the mountains. We had unstable weather today which meant we had zero raptor migration. From the mountains I looked back down into the valley and the weather looked awful down there with so much dust in the air, so I decided to stay up in the mountains for some desert birding. We arrived at Uvda Valley when it was pretty hot already. A nice green patch produced some migrants, and two breeding pairs of Spectacled Warbler. But most fascinating was a large flock of locusts that settled on this green patch. They have already transformed into the adult, yellow form, and indeed we saw many locusts mating. This is pretty bad news for farmers but good news for migrants that will have many caterpillars to feed on in a couple of weeks...
Then we walked across the desert a bit to look for some larks, but saw few birds. I had distant flight views of two Bimaculated Larks, and heard a Lesser Short-toed Lark, but my clients weren't able to connect with any of these. We say quite many Water and Tawny Pipits, and eventually we had some low-migrating Steppe Eagles and Steppe Buzzards but in very small numbers. For me as a leader it was a pretty tough morning but if I read the description above it seems like a pretty good morning. 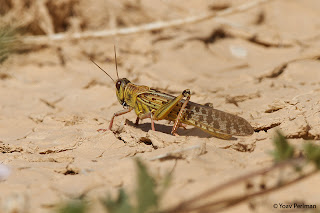 In the afternoon checked the very productive canal north of the cowsheds. I had a pretty good time with three Citrine Wagtails, including a cracking male, two Little Crakes, White-tailed Lapwing (I briefly saw the other one south of IBRCE so there are two for sure), Caspian Stonechat, some Savi's Warblers and quite many common migrants such as Bluethroats, Lesser Whites and Chiffchaffs. 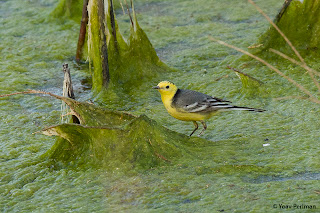 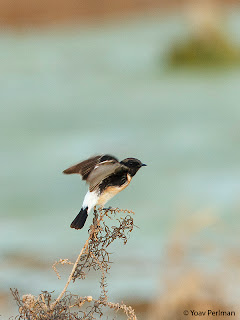 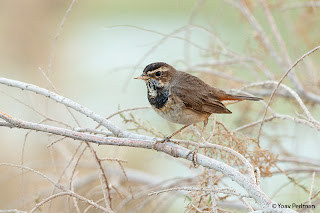