What a great first day! Drove down slowly to Eilat, very slowly... First I stopped near Sde Boker to check a site for more Hill Sparrows. Along the way saw some Steppe Eagles on the move. 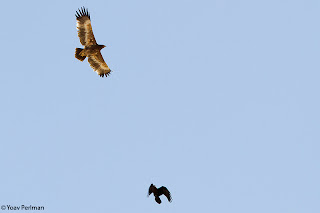 I checked a site that held Hill Sparrows in previous invasion years, and indeed also today there were some singing males there. I've photographed enough of them recently, so today I sound-recorded them. Most males gave the normal song:

But one male gave a weird song, I have never heard anything like that before, nor managed to find anything mentioned in literature about this song-type. It's a tri- or disylabilic call, superficially similar to Cretzschmar's Bunting.

On the way out of the wadi I managed to hit a rock and my car broke down. I had to wait there for two hours until a replacement car arrived. Thank god I have a leased car. Hope Eldan don't read my blog...
Finally I was on the move again. Made a quick stop at Neot Smadar which was amazingly dead (but also very hot and windy). Virtually no migrants around, but this petite female Namaqua Dove was nice to photograph: 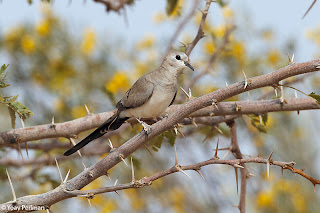 Checked in at Hotel Agamim, said hello to the guys and headed out again. The old saltpans south of IBRCE were full of birds. How may species can you identify in this image? I can see 13. 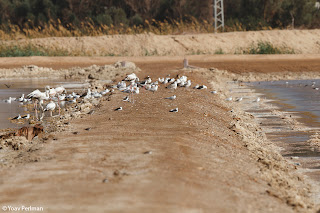 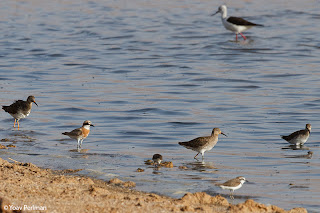 Then went to have a look at the White-tailed Lapwing that had been present for the last week or so, in the ditch south of IBRCE. Nice bird. 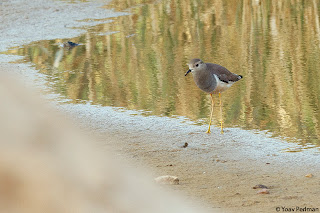 Late afternoon at North Beach was very quiet; only some White-eyed Gulls were worth noting.

In the evening we had our opening event at the IBRCE. Great event, good food, free alcohol - not a bad way to end the first day...