Another great day of birding today along the N Norfolk coast with Martin, Tristan, Tormod and Chris. Weather was sunny most of the day but very cold with crisp wind. We birded several sites - Cley, Holkham, Blakeney and Wells. We spent most of the day trying to dig the Black Brant out of the large brent flocks, so in the end that's almost all we did - scan through brent flocks. Brents are nice but I think I had enough of them. 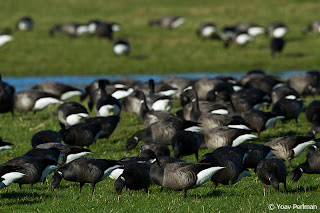 Eventually we found at Lady Ann's drive two known hybrid Black Brant X Dark-bellied Brent. James McCallum knows them well. One of them was a large bull with his family; he was defending the juvenile quite agressively.
This bird sported a great, full collar. The mantle wasn't dark enough for a Black Brant. Note how far does the dark stretch back behind the legs, onto the undertail coverts almost. 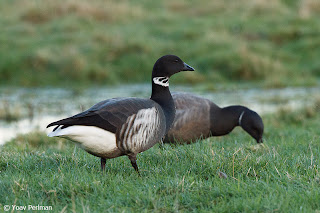 Stay away from my baby! 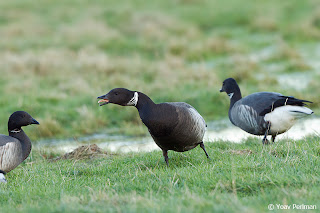 The second bird was more petite. Its mantle was darker and looked better, but the collar wasn't quite good on its left side of the neck: 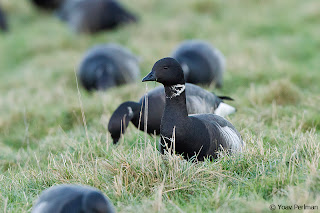 Though on the right hand side the collar looks better: 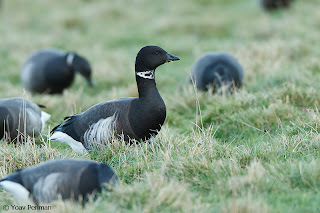 Other highlights today included Waxwing at last (WP tick for me). When driving through Blakeney village, the guys in the front seats had a flyover flock of about 15. I saw nothing sitting in the back, so we started searching the village until I eventually had two brief flight views. Not satisfying - hope to see more in the next week. We also had distant views of a Rough-legged Buzzard, and about 50 Russian White-fronted Geese: 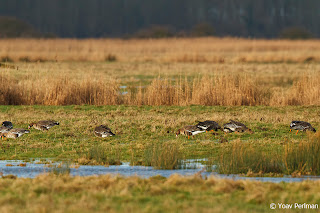 Also another Barn Owl in broad daylight, carrying a ring with 338 on it. I am really not used to see Barn Owls like this; in Israel they are strictly nocturnal. 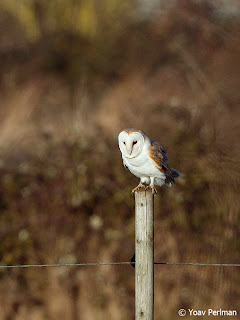 Many thanks to Mr. G for organizing this great weekend and to all the others for such a great time. We ended the weekend with about 120 species - super total don't you think?
פורסם על ידי Yoav Perlman ב- 9:21 PM