Great day today, birding along the N Norfolk coast. Drove up to King's Lynn early in the morning, driving on snow and ice - quite liked that. Met up with the A-Team: Martin Garner, Tormod Amundsen, Tristan Reid, Chris Hind and Nick Moran. Martin & Tormod are in the midst of their 'Pushing the Boundaries' tour. It was still very cold today, and in the morning the roads were icy, but the sun came out which was good. We started off checking a section of Great Ouse river near Saddle Bow. We had some Slavonian Grebes, Goosander and some other stuff. Then drove off to Wolferton where we had this fantastic plastic bird - Golden X Lady Amherst's Pheasent hybrid. Dodgy bird but what a stunner! 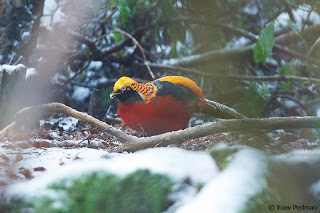 After that we drove slowly through the countryside near Docking. Nothing too special but good countryside birds including some more chickens, Corn Bunting, Merlin, some flocks of Pink-footed Goose etc. 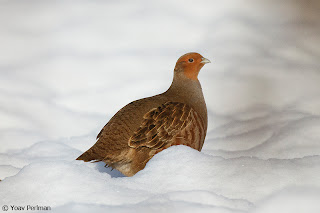 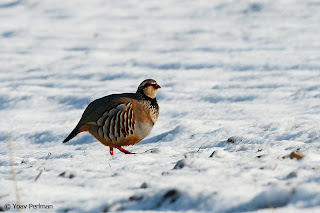 Later in the morning we arrived at Titchwel where we spent the rest of the day. It was very good and we had lots of species and lots of good stuff. I really enjoyed seaducks - lots of Goldeneye but most impressive was a passage of 9,700 (!) Common Scoters in the afternoon. Lapland Bunting was feeding below the seawall with skylarks. The gull flock on the icy lagoon included an argentatus herring, heini-type common and a med gull. Very educational stuff for me. 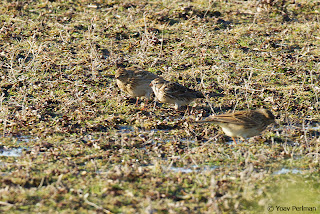 Tormod getting excited about a stupid Black-headed Gull: 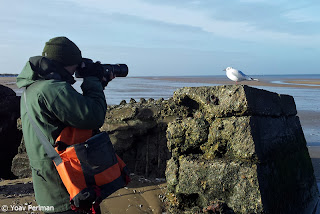 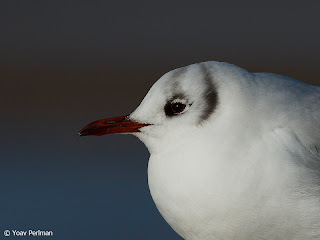 One Barn Owl was hunting in the late afternoon: 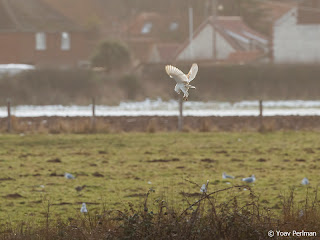 We really challenged ourselves today and ended with an amazing total of 110 species - I was very impressed. Never magined we could get this high. But it was a great day indeed - thanks to all the guys for the hard work and good fun.
פורסם על ידי Yoav Perlman ב- 9:11 PM