We are experiencing a major westerly weather system here ion Israel; at least in the northern half of the country this is expected to be the system of the century, percipitation-wise. It is supposed to peak tomorrow night, and still bring gale-force winds and lots of rain and snow until Friday. Today when I got out of home the wind was blowing so hard I was afraid it's going to knock my car over. I managed to make it to Jaffa driving through serious weather, but when I got there the wind was slower and visibility was quite OK for most of the time. I also expected the sea to be much higher, but the waves were not too bad. I joined Shachar A. and Igal M. for a couple of enjoyable hours before I had to leave for some meetings in my main office in Tel Aviv. It was a big day for Yelkouan Shearwater - we had at least 300 (!) by the time we left at noon. They passed south in small to medium groups. I tried very hard to find a short-winged, pale-faced one among them, but not today. Maybe tomorrow. One sooty was the only other shearwater we had. Other highlight was five Kittiwakes - a good rarity in Israel; this is one of the highest daily counts in Israel. We had about 10 skuas, most distant but one closer bird was a pomarine. 5-6 Gannets, some Pallas's Gulls, and a Peregrine that tried its luck on shearwaters. 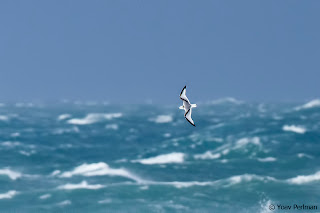