I was supposed to seawatch off Jaffa again this morning, but the Ayalon highway leading to Tel Aviv got flooded this morning and traffic became impossible. So I headed to Ashkelon instead. Wind was slower but the waves were bigger and visibility was rather poor. Much fewer birds today; In two hours I had only a couple of Yelkouan Shearwaters, one Kittiwake, one distant Gannet and an adult Mediterranean Gull. This seems to be a good winter for kittiwakes in Israel. 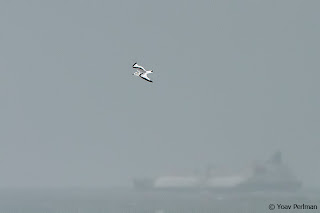