Oh, I'm so funny... I just had to use this amazing pun before our nana's (Asian Desert Warbler) leave us for some godforsaken desert in southern Russia. And thanks to Rihanna for her poetry...
Yesterday I had a long and eventful day with lots of good birds, so let's begin:
My first mission for the day was an atlas box in the remotest part of the Arava. Last year it was one of the best boxes, and this year it did not disappoint even though the area did not receive one single drop of rain. As I got out of the car I heard the distant, beautiful song of a Hoopoe Lark, and then saw the couple. Still not in full breeding activity but certainly looking good, the male gave some short display flights. Next song I heard was of a Temminck's Lark - I had a male perched on a distant bush, with a female running around on the ground near him. Later I saw two more pairs. Fantastic birds!
Temminck's Lark 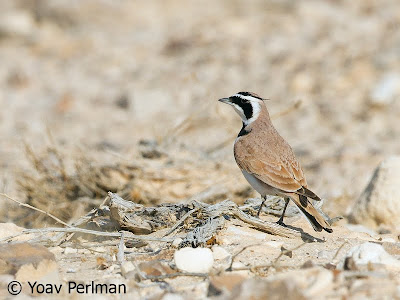 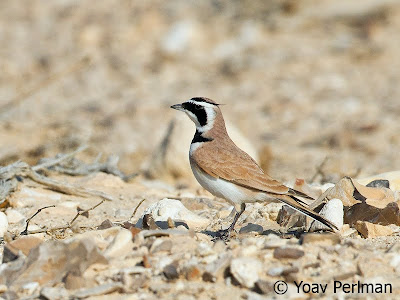 I had a distant pale shrike perched on a bush. I started walking towards it, it flew further away, I kept on walking and it kept its distance from me. I had to run a kilometer back to the car to get my scope and clinch the ID - Steppe Grey Shrike! Good bird in nice summer plumage. No images I'm afraid. My pulse was just returning to normal when I heard a familiar song from high up in the sky - black tail - Dunn's Lark! I was very happy to see it; I wonder if it stays to breed even though the ecosystem is so dry. Unfortunately for all of you foreign birders coming to Israel, this site is deep inside a firing zone and impossible to reach without 4X4, so keep looking for them in easier sites...
Soon afterwards I had four Asian Desert Warblers together - such great little birds. They seem to be on the move now with more birds being seen in recent days. 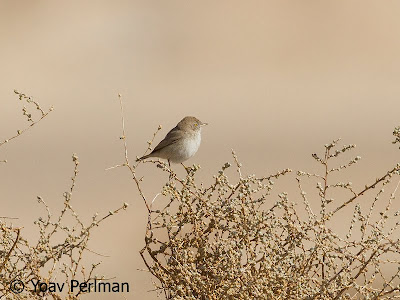 I had quite many Rueppel's Warblers and one Subalp. They are getting their foreheads covered in yellow pollen from Ochradenus baccatus bushes - the ultimate sylvia bush: 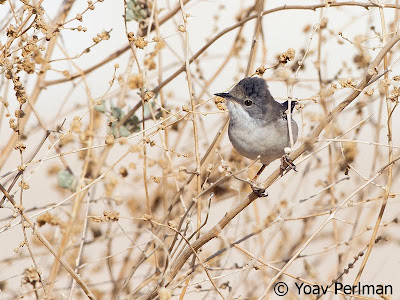 Interestingly I had only females: 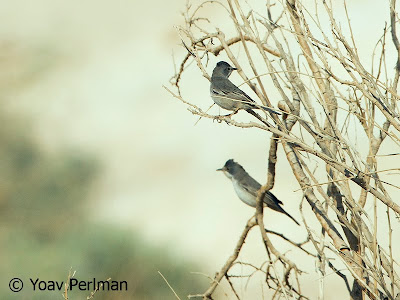 This male Dorcas Gazelle was rather tame: 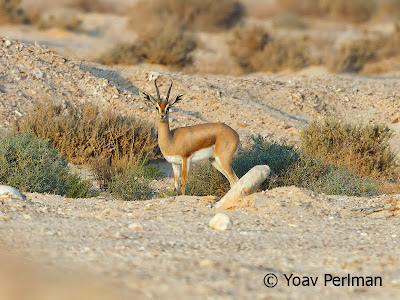 After I was done for the morning I started heading north. On the road near En Yahav I stopped to check a dead bird on the road - it was a Pied / Cyprus Wheatear! Unfortunately too squashed to identify...

I went to Hazeva fieldschool for a short siesta. As I got back to the car, very refreshed, I saw this dark wheatear flying away - Cyprus Wheatear! This is how females look like - very dark brown rather than jet black, very dark crown and very warm underparts: 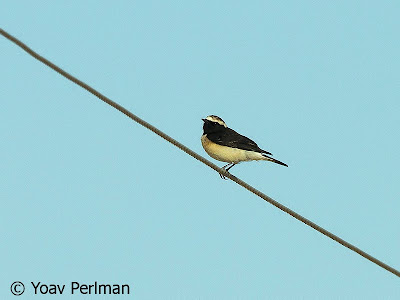 The northern Arava received some rain and has some nice desert bloom. Cistanche tubulosa is a very impressive geophyte: 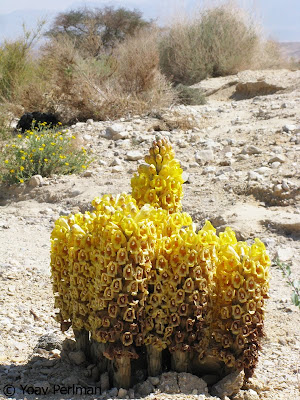 I headed to Kikar Sdom to meet up with Thomas and his wife, from Germany. Driving up I noticed that the visibility was exceptionally good and the air was crystal clear, so I couldn't resist taking a photo of this beautiful landscape: 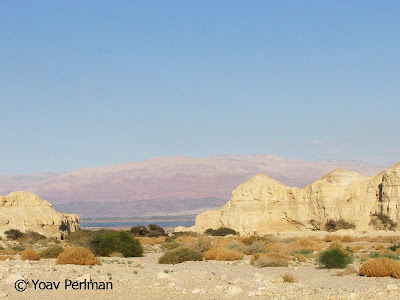 Our Nubian Nightjar tour was very successfull as always, and I was happy to call it a day and make my long way back home.