Did another atlas box this morning deep in the desert, close to the Egyptian border. Some parts of the box were very rocky and rather boring, but other parts had some quality habitats. Birdwise nothing exciting, but I was happy to find my first Lesser Short-toed Larks of the season singing and displaying. Did well with mammals again with a close encounter with a herd of eight Asiatic Wild Ass (Equus hemonius). These impressive animals were "re"-introduced to Israel a few decades ago and they're doing very well. Unfortunately the Syrian subspecies that was found in Israel until the early 1900's became extinct, so these animals introduced are from the Persian population. 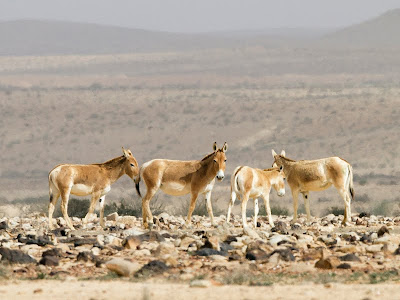 On the way out I was informed by Frederik that he had seen two Black-winged Kites along the Ezuz- Nizzana road earlier; when I drove past I found one. Still an exciting bird, even though it lost it's magic slightly after this year's influx.
פורסם על ידי Yoav Perlman ב- 6:24 PM