What a terrific day! I had the morning off, so I headed towards Yotvata early in the morning. While driving up I noticed these photogenic Black Kites perched on a tree just by the road: 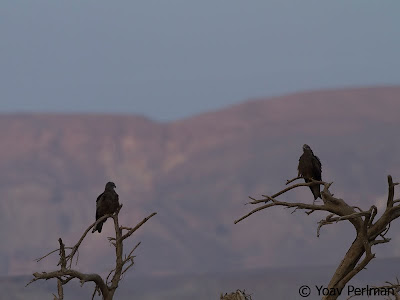 The northern circular field of Yotvata was teaming with birds. Lots and lots of larks, including about 50 Bimacs and two Oriental Skylarks buzzing around. Several harriers of three species (hen, pallid and marsh) were cruising over the field, as was a Barbary Falcon. They kept the birds quite jumpy and weary. This stunning male Pallid Harrier posed nicely though: 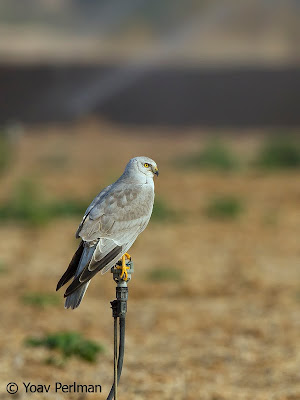 It practiced some stretching: 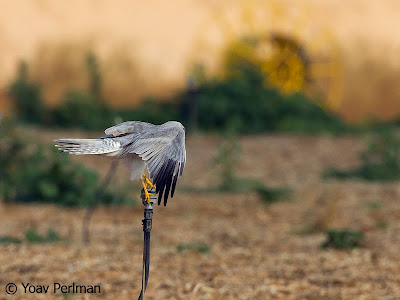 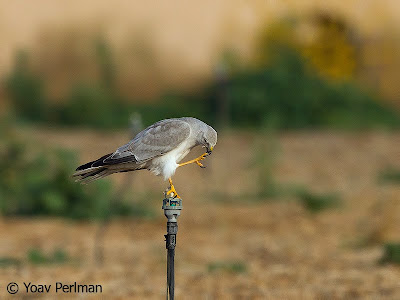 This dark morph Booted Eagle flying overhead further contributed panic to the songbirds in the field: 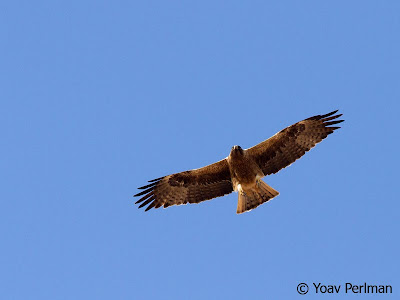 There were at least four Eastern Stonechats in the field - 2 male variegatus and 2 females: 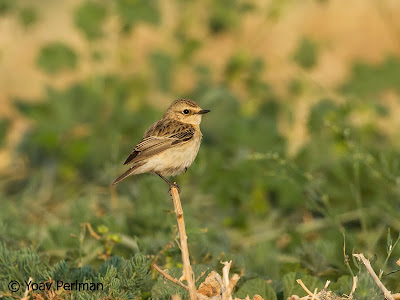 Among the many Yellow Wagtail, I had this pretty superciliaris : 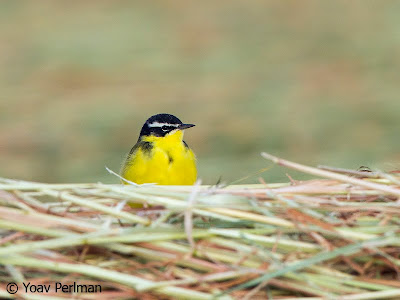 Greater Short-toed Larks were the commonest bird in the field with many hundreds: 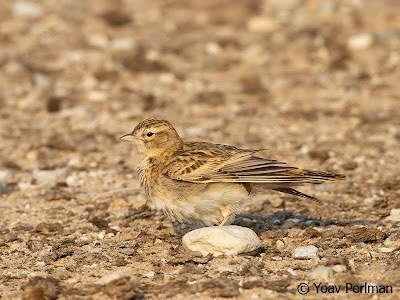 I then moved on to the new constructed wetland of Lotan. These small ponds are excellent and had many birds. I found there this very worn Buff-bellied Pipit. I did not manage to get a decent shot of it, only this record shot: 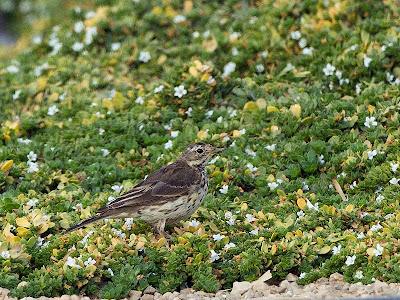 There was a very pretty male Citrine Wagtail there too, but one of our groups arrived to see the pipit and I was unable to photograph it. At the swimming pool I had this pretty male Caspian Stonechat sat nicely on an Ochradenus baccatus bush: 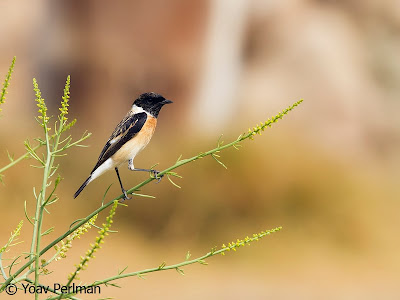 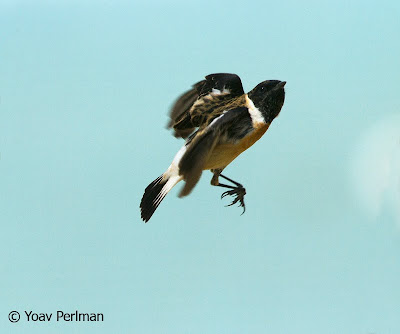 In the afternoon I led the 'Rambo Tour'. We left Eilat and started heading north. Two minutes before we drove past KM 76 I got a text from Tom Nordblad about a Cyprus Wheatear there - perfect timing (thanks Tom!). We made a tiny detour and found the wheatear quickly; all the group had great views.
We continued to Shezaf NR. We parked our vehicle and almost immediately located an Arabian Warbler in a nearby acacia. It played hard to get for a few minutes but eventually we all got good views of it. I had a funny incident when it flew into a tree and from the other side came out an Eastern Orphean Warbler that almost destroyed my reputation in bird identification... But then the correct bird showed and I could breathe again. 96 noisy Spotted Sandgrouse flying over us added to the excitement.
We drove further north to the southern Judean Desert. For the festival we managed to obtain special permits to enter the NR at night, and after a short walk into an impressive canyon we reached a Hume's Owl territory. Sure enough it started calling instantly and we all enjoyed great views of the male sat on top of a small cliff, calling and posing!
Second target species in the bag, we headed down to Neot Hakikar, and after about 20 seconds of searching found a Nubian Nightjar sat next to us. We enjoyed breathtaking views from down to four meters, and then another bird showed just as well. With an extremely satisfied group we headed back to Eilat, most of the group snoring in the back and myself being entertained by our driver's bizzare stories... Arrived back at the hotel almost twenty hours after I began my day, but with lots of great experiences for one day!
פורסם על ידי Yoav Perlman ב- 10:54 PM