Yesterday was a big day for stork migration. After a few days of unstable weather, the skies opened up and a huge push of birds, mainly White Storks and Eurasian Cranes, went through. I was out with my family in the morning, and we had some breathtakingly awesome experiences - thousands of storks taking off low over our heads, so low we could hear their wingbeats, mixed with Black Kites, Steppe Buzzards, Short-toed Eagles, Great White Pelicans and Eurasian Cranes - totally brilliant; images taken by 500mm or by phone don't do justice to the experience: 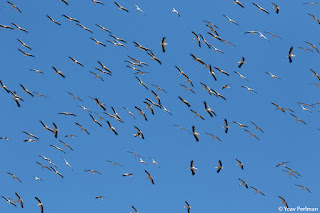 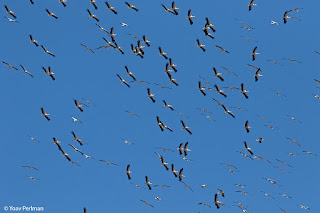 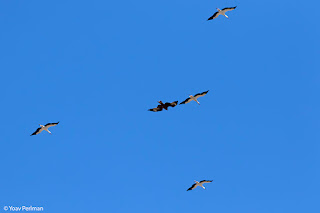 Later on, a bit further south, we saw an enormous swarm of storks, I estimated about 15,000 - the swam was a 5-7 km long... Too distant to photograph, in bad light conditions, in such intensity that even the most screen-addicted kid would say 'WOW'.

It is heartening to see that somehow, despite all the damage we cause to our planet, the spectacle of migration still happens. Sad to think that many of those birds I saw yesterday won't make it through Lebanon today. A timely reminder to support Champions of the Flyway, to prevent such illegal killing, if you haven't already: http://www.champions-of-the-flyway.com/
פורסם על ידי Yoav Perlman ב- 9:18 AM