Israel's five sandgrouse species are doing pretty bad. The four species breeding in the Negev (Black-bellied, Spotted, Pin-tailed and Crowned) have decreased by some 80-90% over the last few decades, with pin-tailed probably faring the worst. This trend is possibly a result of continuing changes in land-use in the Negev, resulting in degredation of their breeding habitats. Combined with the continuous decrease in rainfall in the desert in recent decades, and increasing poaching in adjacent Sinai, they are in deep sh*t. Lichtenstein's, breeding in the Eilat region is a different story, but they're probably doing just as bad.
In recent years, NPA with SPNI are trying to better define the conservation issues affecting the Negev sandgrouse community. The Hoopoe Foundation is contributing to this study. Initial efforts include better monitoring at drinking sites, that concentrate most of the breeding community, and spatial studies using GPS transmitters. Hopefully this study will give us some basic knowledge on these elusive and little-known birds.

This morning I joined a large-scale count of all drinking sites in the W Negev. I met up with Gal the local NPA ranger, and together we counted sandgrouse coming in to drink at some smelly sewage pond near Nizzana. During the morning we had 62 Spotted, 33 Black-bellied and 2 Pin-tailed Sandgrouse come in to drink, and another 68 Black-bellied and 56 Spotted that landed to forage on the nearby plains but didn't drink in our pond. I don't have the totals from the other drinking sites yet but from what I've heard numbers were moderate all over. 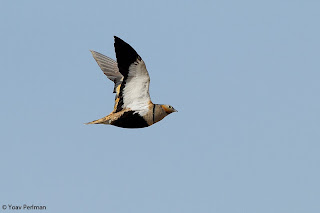 While counting the sandgrouse we had few local and migrant passerines. A male Desert Wheatear and a Mourning Wheatear were really interested in what we were doing and fed on ants practically at our feet. Unfortunately harsh light conditions by then made photography difficult. There were single Willow warbler, Lesser Whitethroat, Tawny Pipit, Red-backed, Lesser Grey, Masked and Southern Grey Shrikes in the very few bushes around us. 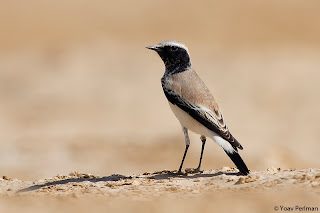 Desert Wheatear with Mourning Wheatear in the background 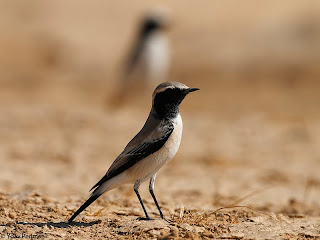 I will post more on the sandgrouse project when we move forward with the research. Good night.
פורסם על ידי Yoav Perlman ב- 10:58 PM