Yesterday late evening I was watching a movie peacfully with my wife after a good dinner. Then I heard the RBA tune going off and then a flood of texts, FB and Whatsapp messages and emails. I knew this must be something good that can potentially destroy another weekend. Had to stop the movie and check my phone - Ezra Hadad had found a Tawny Eagle in the late afternoon not too far away from my house (well done Ezra!). So that was the plan: wake the kids up rather early, send them off with my wife to her parents, and go to look for the eagle.

This morning the plan proceeded quite well, and I was off to the site rather early. As I was driving there got a call from Rami and Shahar that they had just seen it flying away... Rushed there, met up with the guys and started scanning the area and the sky. After about two hours I spotted the bird gliding high but away. I got decent scope views but it glided away too fast to take any photos. It disappered in the south and actually nobody relocated it again today. So that was it with the eagle. Good that I was with a few other guys who saw it too.

Tawny Eagle is mega rare in Israel - this will be about the 5th record to Israel if accepted. I have seen it in Israel before - a famous individual overwintered in the NW Negev in winter 2000/2001 - it even coupled with an Eastern Imperial Eagle and was seen nestbuilding! I managed to connect with it several times during its long stay. I assume that our birds originate from eastern populations.

This site is an extremely interesting zone of rangeland / steppe, at the ecotone between the Negev desert and the Mediterranean climates of C Israel. Unfortunately it's an active military shooting zone, so impossible and dangerous to enter there on weekdays.

Quite many other birds in the area - raptors included some Long-legged Buzzards, Short-toed Eagles and a couple of Montagu's Harriers. I also saw a first flock of 20 Black Kites near Bet Kama. Other stuff included two Black-bellied Sandgrouse, some Cream-coloured Coursers and many Isabelline Wheatears. 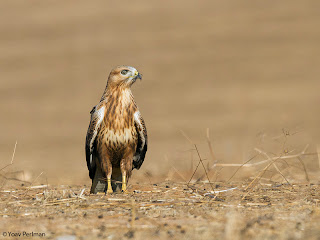 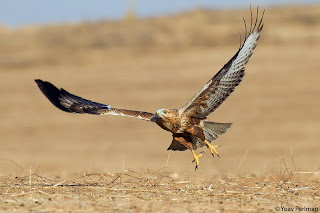 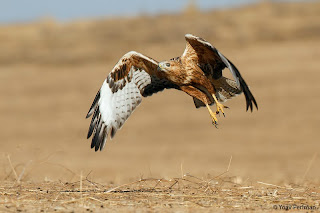 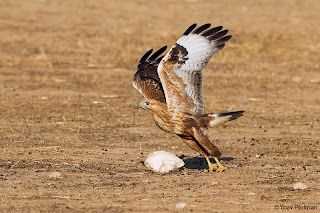 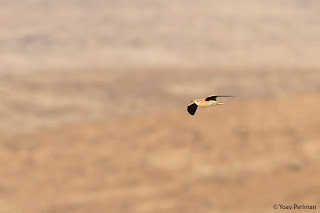 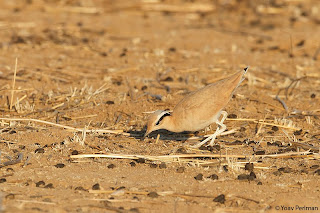 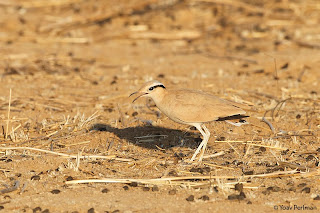 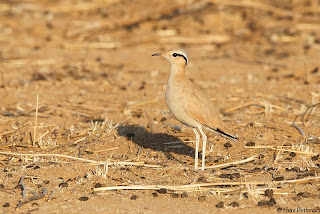 This summers' megas are killing me! After the very quiet spring we had, this summer is certainy compensating well, and the run of megas in recent weeks is quite impressive - two Yellow-billed Storks, Lesser Sandplover, Sooty Tern at Eilat, and now this eagle.
פורסם על ידי Yoav Perlman ב- 9:16 PM