This morning I went with my good friend Gert Ottens to do some seawatching at Eilat. I owed him one after the royal treatment I recieved in NL in February, so despite an extreme shortage of sleep this week we took off at 02:30 to arrive at North Beach right on time, at 05:30. We started seeing lots of terns instantly - they roosted on the border buoys. There was a big flock of about 30 White-cheeked Terns that left the roost (tick #1 for Gert) plus quite many more terns. This year there are exceptional numbers of White-cheeked terns at Eilat - it was by far the commonest bird at sea this morning. The mornings' total must have been about 35-40 birds! Lots of moulting adults, nice and dark, and lots of 2cy too. We had them flying around the gulf in small groups the whole morning. 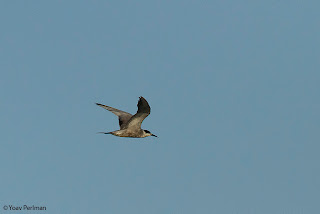 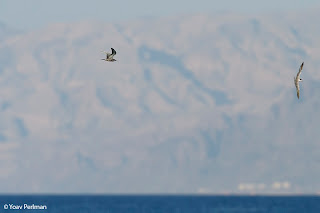 Star bird of the morning (for me) was a 2cy Arctic Tern. I first noticed it fishing W of us on the Israeli side of the gulf, with other terns. Then it flew back into sea and reappeared again fishing with other terns on the Jordanian side of the border. It was always too far for photography but we had good scope views and saw all the important ID features, including small size and compact structure, small bill, very white above with transparent primaries and only thin dark band on upperwing coverts. Arctic Tern is more or less annual at Eilat.

Another very good tern was Lesser Crested Tern (tick #2 for Gert). At first we had one bird sat on the border buoys; then it took off and was briefly joined by a second individual. One individual was seen throughout the morning. Crazy distance record shot: 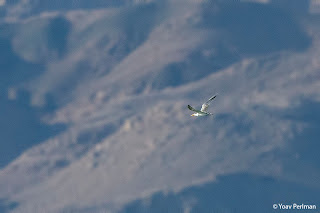 We had only two Bridled Terns - larger numbers were seen in recent weeks: 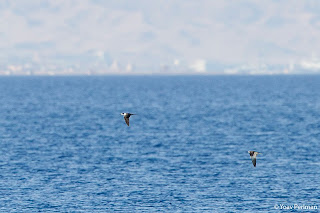 Other terns we had at sea were common and caspian. Nice to see all of these species together, originating from different parts of the world. Other seabirds we had were an adult Long-tailed Skua, one Cory's Shearwater and several White-eyed Gull. All of these birds made the long drive worthwhile. Excellent morning!

When the wind and temperatures picked up we continued to the IBRCE saltpans that were good with lots of shorebirds and gulls. Some White-winged Terns there as well: 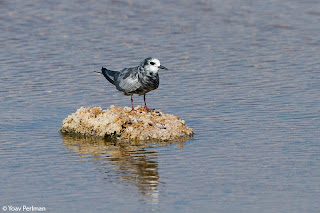 KM20 saltpans were quieter and held smaller numbers of shorebirds. Nothing really interesting there. The long-staying melanistic Greater Flamingo was still there - what a distinctive bird! 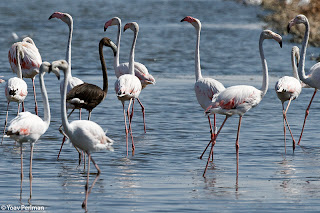 Among the flamingo flock two Turkish-ringed birds, present for a few days now: 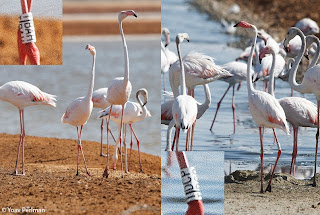 A pair of Namaqua Doves sat on the fence nicely: 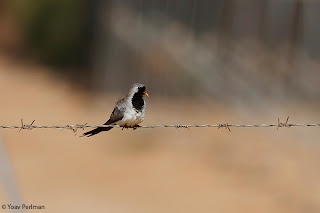 On the way back home we had a male and juv. Hooded Wheatear at Neot Smadar sewage, and in total four Egyptian Vultures. Thanks to Gert for the company today.
פורסם על ידי Yoav Perlman ב- 8:58 PM