Went down to Eilat with my family for three nights, Thursday to Sunday. Got back home just a couple of hours ago exhausted but very satisfied. Apart for having a great time with the kids and wife (lots of marine activities) I managed to fill my memory card up pretty well.
On Thursday we took a tourist boat trip in the Gulf; saw some White-cheeked Terns and White-eyed gulls on the wooden pier of the Dolphin Reef, but nothing else.
Friday morning I met up very early with Shachar Shalev and Omer Tamari at North Beach. Similar species to the previous day but larger numbers - 19 White-cheeked Terns and 20 White-eyed Gulls. In addition 2 Cory's Shearwaters and that was it. By 07:15 I was back at the hotel and put on my father costume once again.
In the afternoon, while snorkelling with my elder son, I got a message from Shachar that he had just found a juv. Caspian Plover at the southern saltpans, that are 2 minutes away from our hotel. So I packed my family quick and dumped them in the hotel and dashed to the saltpans to see the bird. Caspian Plover is uncommon but quite predictable in spring. But in autumn it's a good rarity and pretty surprising.
When I saw the bird it was with a big, skittish flock of Little Stints, so I didn't even try to get close to it. Watched the bird for some minutes and drove out of the ponds. Nice find Shachar! BTW yesterday this bird was refound by Itai some km N, at KM20 saltpans, joined by a second bird. 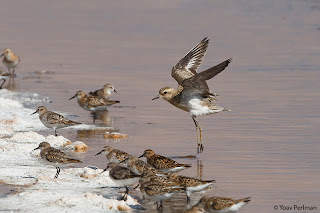 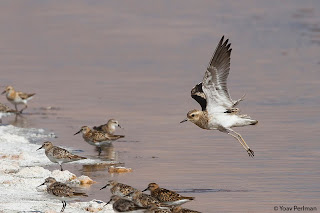 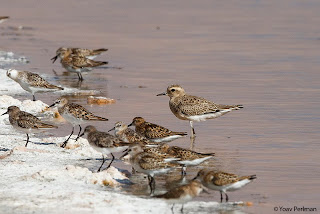 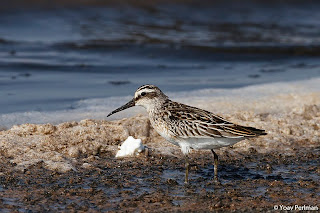 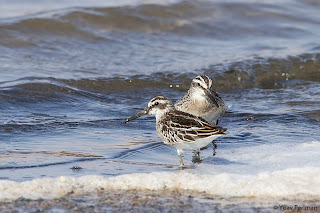