Day 3 of the Hermon survey was fantastic again. The high elevations are so cool. We spent most of the day above 2000 m. Early in the morning we checked the ridges near the upper cable station that were very good. Later on we went down into Bol'an Valley, that is rarely visited by civilians as it is very close to the Syrian border. It was very beautiful and special in the valley but birds were fewer than early in the morning.

By far the most dominant species was Northern Wheatear - we had about 60 breeding pairs in amazing density. They were just all over the place, many of them already with active nests. 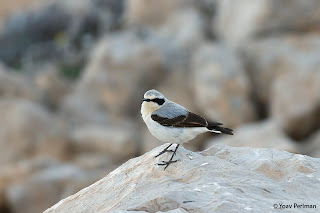 Woodlarks were also present in good numbers, with about 20 territories recorded. The males were very vocal. Did you know that Woodlarks have the underwing pattern of a Swainson's Thrush? 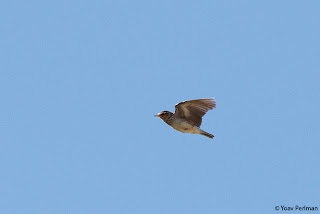 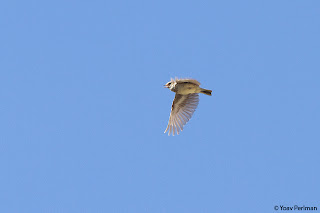 Rock Sparrows breed in any kind of crevice - this pair nests on the wall surrounding the cafe of the upper cable station: 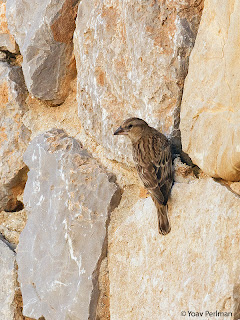 On the lower slopes Rock Buntings were present in good numbers, singing and nest-building, like this male with a bill-full of nesting material: 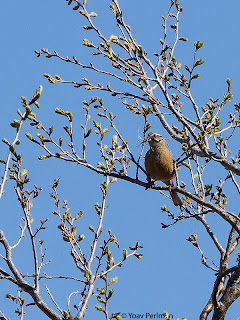 We scored pretty well with high-altitude specialties. We had about 8 pairs of Horned Larks, and three pairs of Crimson-winged finches. The finches were very mobile and difficult to photograph. In fact I had hard time photographing today, nothing really came close.


Crimson-winged Finch - so distant but so pretty! 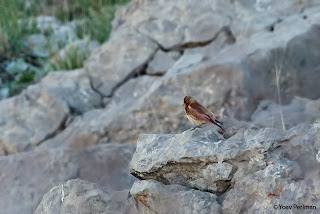 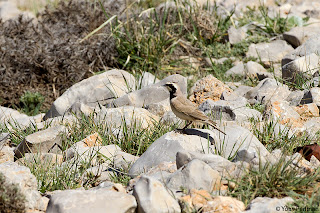 Other highlights included four pairs of Rock Thrush, two pairs of Spectacled Warbler, one flyover Hill Sparrow (Amir) and many more. However we couldn't find Irania and Upcher's Warbler - perhaps too early this high up. Hope to improve that on our next visit in June.

I am not a flower expert but there were some beautiful flowers up there. Sun's-eye Tulips flower here two monthes later than in the N Negev. 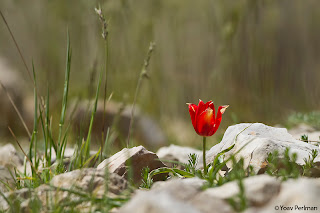 Many thanks to Lior and Amir for their hard work and company this morning.