Arad really insisted that the title of this post will be 'The Bee Gees'. First of all, it's his favourite band, and I think they represent many aspects of Arad's personality. But more important, while ringing at Ashdod this morning we used more 2.8 mm rings (BG) than we usually do. They went mainly on Sprossers - we had 29 (almost Ngulia numbers...), but also we had three Barred Warblers and one Olive-tree Warbler.
It was a very busy morning with big numbers (220 in total) of 16 species; unfortunately I had to leave early while we were still trapping well. Mainly Blackcaps, Lesser Whites, Sprossers and Reed Warblers. None were really dominant which made ringing more fun but punching the data in much more difficult. It was nice to catch one Marsh Warbler.

In the field, three Little Bitterns, Little Crake and Water Rail kept dodging our nets the whole morning. Some Levants were seen taking off in the morning.

Many thanks to Arad, Miriam and Roei for their hard work this morning. 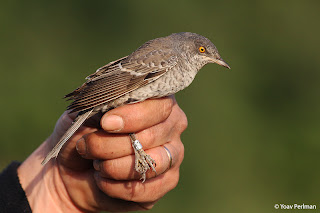 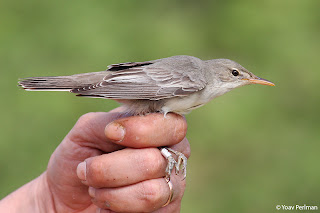 The Bee Gees - image taken from their Wikipedia page 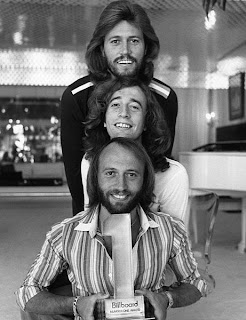