Yesterday i went ringing at Ashdod. The weather was good and lots of birds around. My ringing site has improved - I have now permanent water supply in my swamp, so I expect more birds there in the future when vegetation developes more.
We had a very good morning, though it began with me droning in my flooded swamp waist-deep. Not huge numbers of birds (total of about 85 - hadn't done the totals yet) but a steady and very varied catch, just the way I like it. Several species with equal numbers - Bluethroats, Chiffchaffs (outnumbering willows already), Spanish Sparrows, Reed Warblers and Blackcaps.
Halfway through the morning something happened to me that hasn't happened for a long time - I held a bird that I had no idea what it was. It was a small phyllo (wing 62), extremely pallid and grey, like a bonelli's, with these greenish fringes to secondaries. It also had a weird, deep-based bill and rather steep forehead. Wing structure was like willow though. After lots of thinking I had to agree it's a Willow Warbler, but that's one freaky Willow Warbler. I have never seen anything like it before. 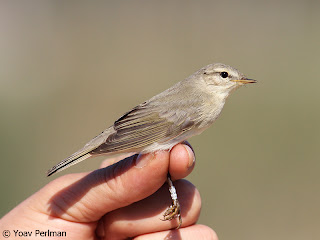 Another fine bird was this 1cy male Caucasian Stonechat: 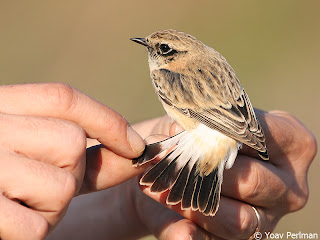 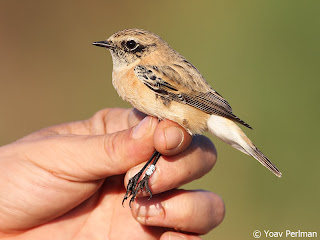 Penduline Tits have returned to my swamp - I caught three: 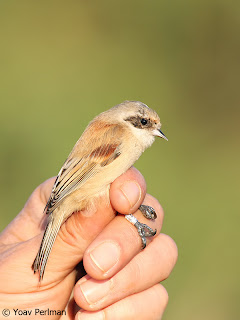 Many thanks to Arad and Miriam for their help this morning.
פורסם על ידי Yoav Perlman ב- 8:33 PM