Went down to Eilat with the family for a long weekend. It's holiday season in Israel, so lots of people on the road and everywhere practically, but we managed to have a very good time. During the three mornings I spent there I managed to squeeze in two hours of birding, before the family woke up and I got the terminating phone call from my wife: "good morning, we're up!". That means I was under a real pressure of time each morning to get something done before I had to go back, and most of the birding was done before sunrise. As a result, in this post the photographic quality is lower than I usually present here.
Friday morning started off at the IBRCE, said hello to the guys and enjoyed this sweet Scops Owl they had just caught: 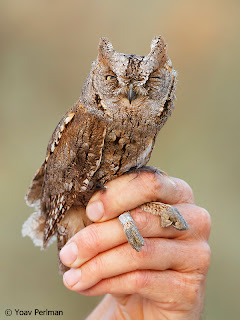 Drove off with Re'a to KM20 saltpans that were packed full with shorebirds, mainly Little Stints and Ringed Plovers with many hundreds each. We scanned the large flocks very fast but the best we came up with was one Broad-billed Sandpiper. In this image the focus escaped to the Little Stint on the right, sorry, didn't have the time to check the images on the camera: 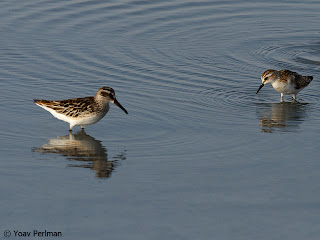 Both at MK20 saltpans and later on at KM19 sewage farm lots of marsh terns present - mainly Whiskered Terns but fewer white-winged and one black. 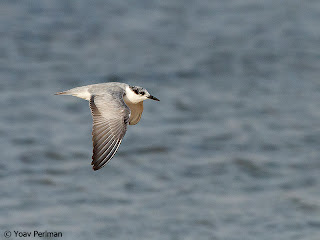 Saturday morning I went to check Yotvata. As I drove in I was happy to see a large flock of about 40 Blue-cheeked Bee-eaters thrashing a beehive near the cafe. Most were juveniles. 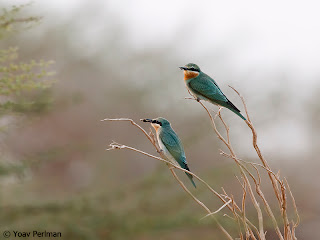 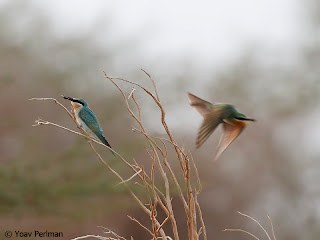 The southern circular field was swarming with birds and I had a really good time there. While I was birding got a call from Re'a that they had just caught a Common Rosefinch but I decided to give it a miss and continued birding. In the field there were about 1000 Greater Short-toed Larks, among which I heard one Lesser Short-toed; many tens of Tree and Red-throated Pipits, with fewer Tawny and one Richard's Pipit; many wheatears (isabelline, nothern, desert and black-eared), many whinchats and Red-backed Shrikes, tons of hirundines; one Black-headed Bunting; Barbary Falcon and several harriers (marsh, pallid and montagu's) cruising over the field - great fun. 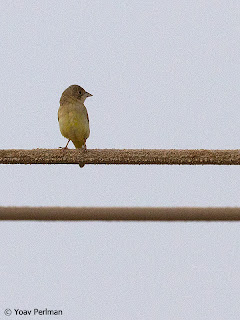 The sewage ponds were very birdy too but nothing special. This juv. Collared Pratincole appeared for a brief visit (still before sunrise): 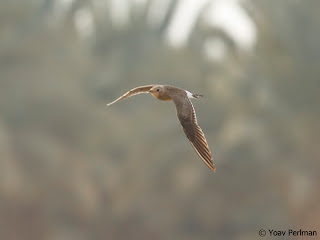 In the late afternoon I got another call from Re'a that they were watching both a Purple Swamp-hen and White-tailed Lapwing at KM19, but I was busy with the family so could not go for these good birds. Took a chance and hoped they'd wait for me till the next morning.
So Sunday early morning I first had a quick look at north beach that had very little apart for the resident Brown Booby and 3-4 distant White-cheeked Terns. Then I headed off to KM19 sewage tanks. The tanks are full of fish and had loads of gulls and herons, but no sign of the chicken or the lapwing...

Armenian Gull - this must be 1cy but how on earth do they get so bleached and worn in such a short time? 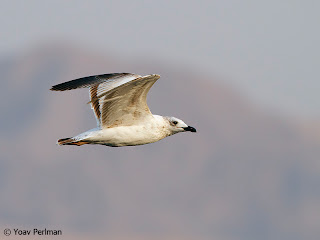 A small flock of five Spoonbills was fresh in: 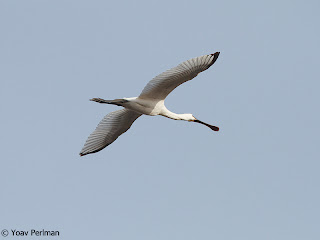 Only bird of note was one Citrine Wagtail.
So to conclude, not a bad family birding holiday. Eilat is always fun. This is not a classic period for birding in Eilat - still very hot and not too many common migrants hopping all over the place like in spring, but still some sites were good and some quality too.
פורסם על ידי Yoav Perlman ב- 7:49 AM