This morning after taking my kids to the kindergarten I headed off to Timorim, not too far away from my house, to look for a Pacific Golden Plover found by Eran Banker yesterday. In perfect timing I received an RBA message alerting of a Dusky Warbler trapped at Yeroham in the C Negev by Yoram Zvik & Rony Livne. PGP is a very good bird but I did not hesitate for a second and changed my destination to see the warbler. I have seen one in Israel before - a bird I found and ringed with Eyal Shochat on18 October 1996 near Beer Sheva, but that was long ago and I have no images of that bird. Dusky Warbler is still mega rare in Israel - this is only the 6th record; all but one were ringed, which made them non-twitchable and therefore it was a serious blocker of mine for quite many years. But in the modern era, when info passes so fast and cars are so fast as well, it became possible to twitch a bird in the bag.
Quite a good crowd assembled, both of local birders and some of Israel's leading listers. The bird was processed, photographed and released in good health. It was seen flitting in the bushes after release until it disappeared.
It is quite an easy Phylloscopus to identify, with the combination of dark-brown upperparts, golden brown underparts, long and prominent supercilium, especially in front of eye, and delicate and pointed bill. It is tiny, with a wing of 55 mm. The wing was typically very rounded including heavily emarginated primaries. When released it gave one typical call - a dry 'tack'. The bird was identified as 1cy.

Congratulations and many thanks to Yoram and Rony - excellent bird! 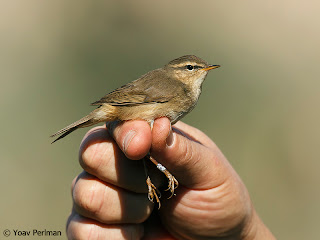 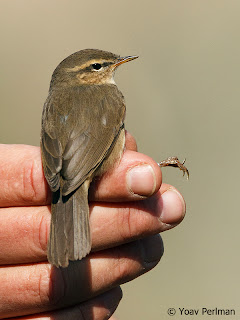 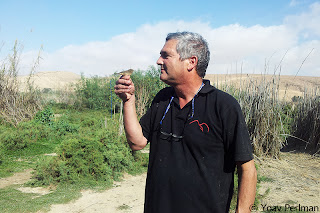