Had quite an amazing day today. Met up with Hdoram in the morning, we drove together to watch and study the Basalt Wheatear found yesterday by Itai Berger and Daniel Berkovic at Uvda Valley, near Eilat. Hadoram has been working on this form / subspecies / species / whatever for some years now - this is a fascinating case of a probable species that slipped under the radar for so many years.
Anyway, the bird was missing in the morning. Hadoram and myself started to accept the coming failure, as this bird is on migration back to its breeding grounds in S Syria / N Jordan. So it must have moved on... But just before we arrived on site we received a call from Itai Shanni who had relocated it. Very soon we joined Itai and a few more birders that assembled, and watched the bird for a very long time. It is a fantastic bird - totally different jizz from lugens, different song, and of course very distinct plumage. Note the solid tail band, pale grey inner webs to secondaries but not striking white like lugens, very rounded head, small bill, very limited white rump. Pale tips to PC were worn on the outer feathers but visible on the inner feathers. The bird showed the typical partial moult of 2cy wheatear - it had unmoulted remiges, PC, Alula, tertials (1 replaced tertial on left wing) and 2-3 GC. The bird showed some unique behaviour - bowing, somewhat like finsch's. When feeding it often hovered above the ground. We had it once mobbing a small snake sp. together with a Blackstart and a Black-eared Wheatear. We heard a short song sequence - song faster and more musical compared to lugens.
Basalt Wheatear Oenanthe (lugens) warriae - 2cy female 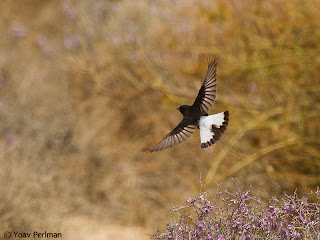 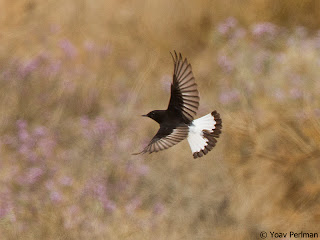 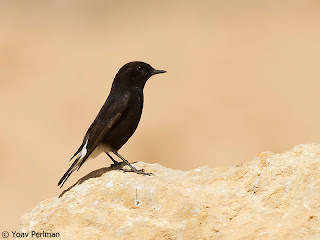 I have seen it previously, in 2003, but my images from back then were poor. I am quite happy with these flight shots - I assume there are not too many published images of this bird in flight. Congrats to Itai and Daniel for finding this great bird.
We did no birding elsewherre in the Arava, we were very focused on the wheatear. However in the same bunch of bushes I saw casually about five Rueppel's and three Cyprus Warblers, and lots of other migrants.
In the afternoon I met up with some Finnish and Dutch birders at Neot Hakikar. Again we had a super tour - beginning with Clamorous Reed Warblers, Dead Sea Sparrows, 2 Garganey etc. before dusk. Then after dusk the Egyptian Nightjar showed again very well, plus 4-5 Nubian Nightjars.
פורסם על ידי Yoav Perlman ב- 9:11 PM