Yesterday I did some work on Yellow-legged Gulls with Amir at the Zoological Gardens of the Tel Aviv University. After the gull stuff we went to have a quick look at the skin collection there. I had a very quick browse over some of the mounted skins, and was amazed to find this vittata Pied Wheatear - it's never been recorded in Israel yet! We were excited for a few minutes but then were disappointed to hear from Daniel, the collection manager, that this bird was taken in Ethiopia...  Forgive amir - the image was taken with his iPhone. Image courtesy of the Zoological Museum, Tel Aviv University. 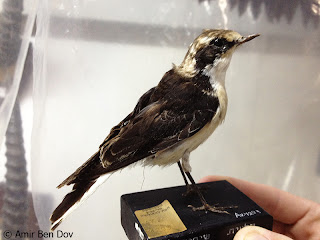 Later on in the evening I met up with Santtu and his team from Finland at Neot Hakikar. We had a nice afternoon's birding with Clamorous Reed Warbler, Little Crake, Penduline Tit and lots of migrants around. After dusk we had cracking views of four Nubian Nightjars. The Finns were happy of course.
פורסם על ידי Yoav Perlman ב- 8:04 PM