Today I led one of the long-distance tours of the festival, to the Dead Sea region. We made an early start and arrived at Shezaf reserve pretty early. We failed to find Arabian Warbler but saw a good selection of desert species including the playful babblers. Among the migrants Cyprus Warbler and 3 Euro Crag Martins are worth mentioning.
Then we drove on to Metsoke Dragot,  a small village on top of the cliff overlooking the Dead Sea. We had good raptor migration with a nice selection of species (4 eagles, 2 vulture, kites, Osprey etc. among the many buzzards). Then we went to the watchpoint overlooking the Darga gorge. We watched the Bonelli's Eagle nest - there one medium-sized chick in it, but the parents were absent. And then both of the arrived, deep in the gorge about 200 m below us. They were harassed by some Fan-tailed Ravems and demonstrated some very impressive aerobatics. Then they started climbing up until they were at eye level with us, damn close, what an amazing experience.
Bonelli's Eagle 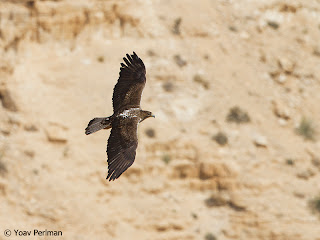 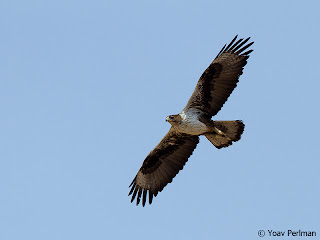 While waiting for the eagles to show up we had great views of this singing male Mountain Bunting - fantastic bird. Later on we had them in two more sites.
Mountain Bunting (Embriza striolata) 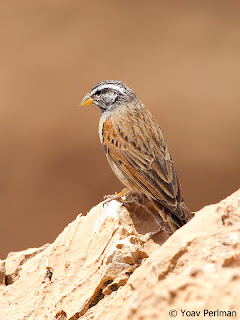 On the way back checked some more sites and got most of the Dead Sea specialties, including Dead Sea Sparrow, Clamorous Reed Warbler. At Sapir Park one female Sibe Stonechat was nice. Among the mammals Nubian Ibex and Rock hyrax. Back to Eilat 14 hours after leaving - long day indeed, and without even one Pied Wheatear the whole day!
Arabian Babbler 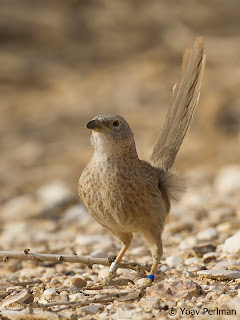