Lately I've been a very bad boy by completely deserting my gull duties at Ashdod. In fact I didn't pay the Ashdod gull sites not even one single visit this winter, and I was actually feeling quite rusty. So in a last minute attempt to get back in business, I met up with Steve Arlow this morning. He's visiting Israel with his wife, and they arrived at Ashdod straight out of the airport. We had a good day - not too many gulls but very good variety, good photo opps and lots of difficult, hardcore birds that kept us busy all the time. This is Baltic Gull migration time, so most birds were baltics. Still we had good numbers of Heuglin's Gulls - some tens of adults. Some of them had exceptionally bright bare parts - look at the bright legs of this bird. Note also the baltic in the background - it's one of the paler individuals, with a clear contrast between upperparts and wingtip. 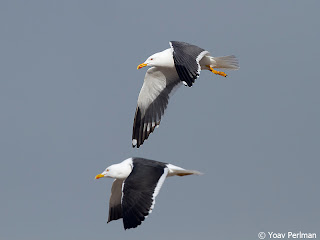 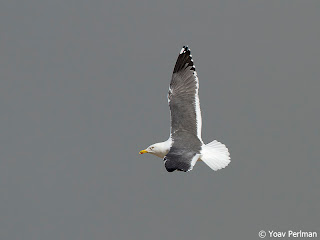 Among the baltics we had few rings: We had a couple of adult barabensis - this bird showed very well. Note prominent gonys, bluish tones to upperparts, black all the way to P2 but large grey moons on P4 to P6, and fine streaks on primary coverts.
Steppe Gull Larus barabensis 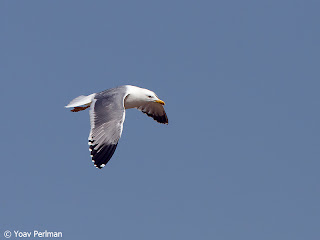 We had few adult caspos but quite many young birds.
Caspian Gull 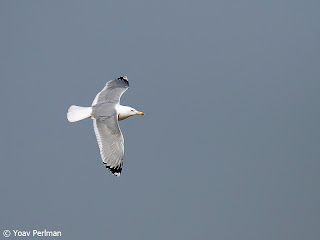 In addition we had quite many Armenian Gulls (no adults) and few Yellow-legged Gulls.
I had a good time with Steve. I learned a lot, and I hope Steve did as well.
Supporting cast included Greater Spotted Eagle & Cuckoo, 4 Temminck's Stint, warblers, wheatears etc.
פורסם על ידי Yoav Perlman ב- 8:16 PM