This morning I went with Jonathan to bird in the Eilat area. Our first mission was to see the Grey Hypocolius found by Barak Granit a few days ago near the IBRCE. We searched for it for a long time but at first with no success. We worked the nearby date plantation, in which we had an Olive-backed Pipit. I heard a very interesting Phylloscopus calling several times. It first sounded to me like an odd humei call, but after consulting with my iPod I found it closely matching proregulus! The bird was very mobile and stayed high in the canopies. I kept losing it, even with the help of Itai and Jonathan. I had a glimpse of it flying from treetop to treetop - it was tiny but I could get no plumage details. Eventually we gave up on it, but if a pallas's gets found tomorrow then it's mine!
We returned to the IBRCE, and soon after we had a few brief encounters with this beautiful bird. Unfortunately it was very shy and jumpy, and kept disappearing in the thick vegetation of the IBRCE. lucky I managed a couple of shots. I was very happy to see it - haven't seen one for many years.
Grey Hypocolius - male 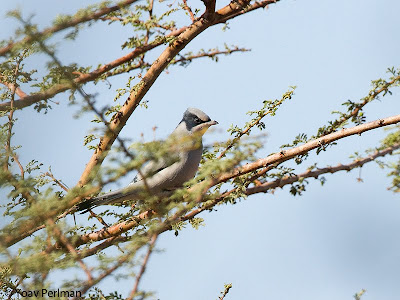 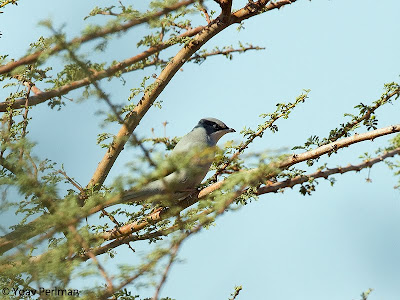 While searching for the hypo I had quite a few Indian Silverbills: 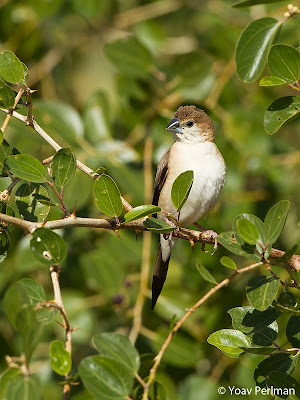 We continued to Yotvata fields. In the southern field I had two Richard's Pipits, male Hooded Wheatear and a few Crag Martins. No sign of the recent rarities (Blyth's pipit and Little Bunting), but it was nice to see the couple of Hoopoe Larks that have been hanging around in the field for a week or so. Bizarre to see them feeding like Crested Larks in the dry field. I am used to find them in the remotest corners of our desert. Part of the time they were feeding with a small group of Ringed Plovers - interesting combo.
Hoopoe Lark 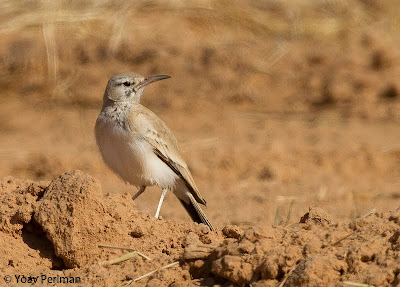 In the northern fields we enjoyed (too?) good views of two first-winter White-fronted Geese. The white forehead is quite developed for a youngster, but the lack of barring on the underparts and dark tip to bill indicate these are young birds.
White-fronted Goose 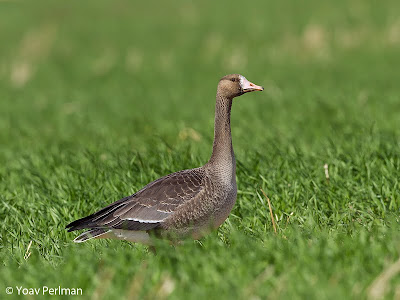 There was considerable size difference between both birds, but the small one was not small enough...
This seems to be a good season for white-fronts in Israel, with small groups recorded in several sites all over the country. 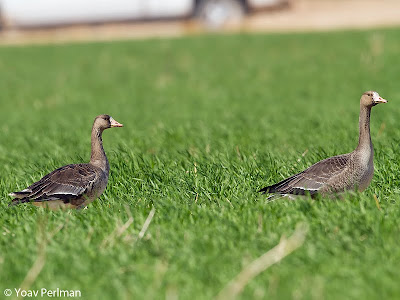 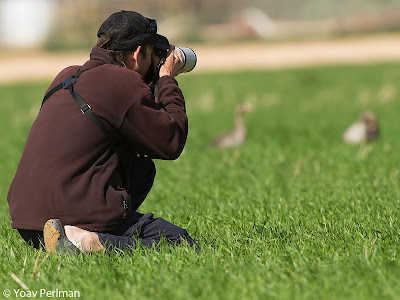 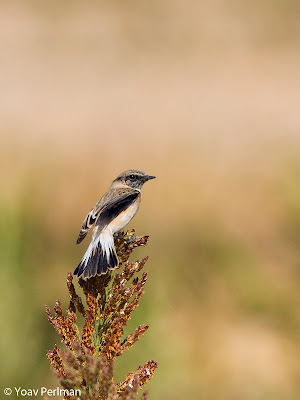