Today I went with my group up to Mt. Hermon and the Golan Heights. We started off on Mt. Hermon, and very quickly connected with some of our main target species - Sombre Tit, Western Rock Nuthatch and Rock Bunting. Later on we went up to the higher elevations where we had good numbers of Shore Larks (about 40) and four Crimson-winged Finches in flight. For us Israelis, 100 Fieldfare and 20 Mistle Thrush were good birds. Most frustrating were two Chough sp. Mark and I saw flying miles away. I have never seen a chough in Israel before. But nevertheless it was a fun morning, with good birds and spectaculr scenery, even though birding was rather slow at times. 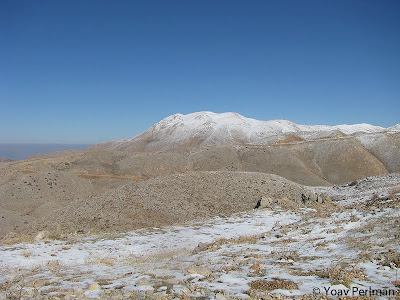 On the way down we received an unexpected bonus in the form of two Wolves - great views of these mighty animals, bringing pur mammal list to 10.
After lunch we drove to Gamla. It is quite sad to be in Gamla without griffons, but still we had some good birds. Best were a pair of Bonelli's Eagles, performing some display and collecting nest material. Other good birds were many Rock Sparrows and several Eurasian Crag Martins. This nice momus Sardinian Warbler posed nicely: 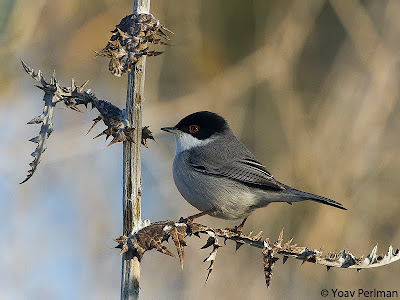