Wow, lots of stuff...
Yesterday had a long and productive day with Kent Olsen (Denmark) and his friends. From the airport they drove directly to Ashdod where we met up with Amir and Ehud for some gulls. We had a good ID workshop, and we enjoyed close-up views of many barabensis, heuglini, cachinnans and armenicus. We had a quick look at the beach, en-route we had a cracking male Rueppell's Warbler and a 2cy Pallid Harrier. At sea we had an adult Pallas's Gull.
From there we drove to Hulda reservoir where we had 46 White-headed Ducks (females only), two Ferruginous ducks, several summer-plumaged Black-necked Grebes and heard a Citrine Wagtail. White Storks were passing in good numbers overhead.
In the afternoon we visited Lahav Reserve where we had good views of 3-4 singing Long-billed Pipits, two Finsch's Wheatears and several Spectacled Warblers. On a nearby cliff we had a few Lesser Kestrels.
In the evening at Neot Hakikar we had good views of four Nubian Nightjars - a great end to an intensive day.

After a short sleep I found myself this morning at Nizzana. This time I surveyed an atlas box deep in the desert south of Ezuz. Highlights included a pair of Temminck's Larks in courtship, two MacQueen's Bustards, all four Sandgrouse species scattered on the hills (two crowned), and another territory of Lesser Short-toed Lark. I already had several families of Spectacled Warblers with fully grown fledglings, like this one. They are fast breeders! 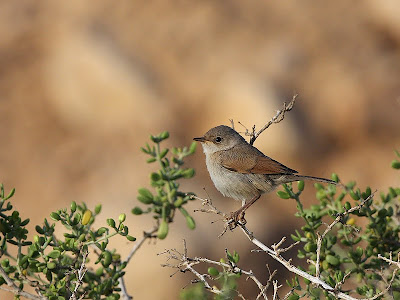 This male Hen Harrier spent some time hunting over a wide wadi. It had an interesting interaction / cooperation with a male Merlin. They were hunting together for about 15 minutes, the harrier doing the regular cruising routine, flushing many birds. The Merlin kept darting across the plain, chasing after the birds the harrier had flushed. I have never seen this kind of cooperation before. 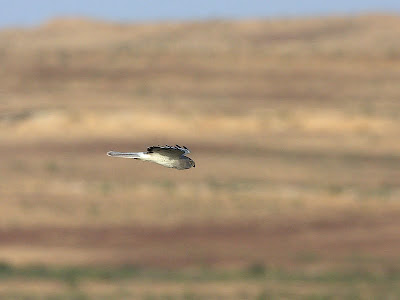