Yesterday I led the very-full-day Nizzana tour. We left Eilat very early and arrived at Nizzana in the early morning. We scored both MacQueen's Bustard and Cream-coloured Courser very easily, with terrific scope views for everyone at the 'theatre' - quite a few groups of birders were watching the same birds on the raised platform along the Nizzana -Ezuz road.
We continued to bird the area and saw much good stuff. We had a pretty hard time with sandgrouse though, as the birds don't come to the traditional drinking spots due to the heavy winter rains leaving puddles all over the desert. We saw a few tens of pin-tails, and heard spotted.
On the way out we had good views of 'lilith' Little Owl and this cracking male Rock Thrush: 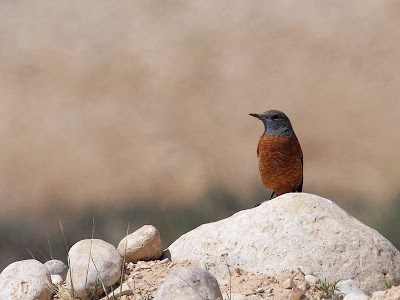 We made several stops on our way south, and added some good species to our festival lists. A late afternoon stop at Hameishar hit the jackpot though. The place was very birdy, with huge numbers of wheatears and larks present. Just as we walked out of the car we flushed a Thick-billed Lark that flew north and never stopped. We had many good migrants there, including Quail, Bluethroats, Water Pipits, Bimaculated Larks and a single Lesser Short-toed Lark.
A small flock of wagtails included this pretty male Citrine Wagtail - a funny place to see it. 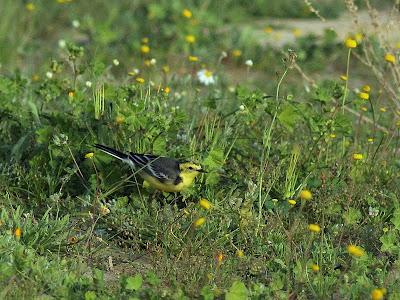 As you can see, I like this take-off shots: 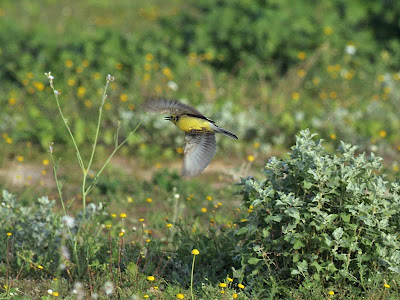 On our way back to the vehicles we came across an interesting pipit. A first glance showed that it was either a Blyth's or Richard's. We had very close but very brief views of this skulker, side-on and front, and everything I could see fit well - small bill, pale lores, neatly streaked cap and mantle, shortish tail. When the bird flew it a perfect blyth's call: a yellow-wagtail like call, higher pitched and clearer than richard's, followed by two soft 'chup-chup's. The shortish tail was obvious in flight. We lost the bird as it crossed the road and out of site, and we had to leave to Eilat.
This is a mega in Israel, with three accepted records. I have to be cautious and call it a probable, as I did not photograph it, did not have perfect views and did not see all the fine details, such as median-coverts pattern, hind claw length, but I feel pretty good about this bird. I hope other birders manage to relocate it.
פורסם על ידי Yoav Perlman ב- 10:26 AM