Yesterday afternoon news broke of another astonishing first for Israel - Broad-billed Roller, found by Gabriel Levitzky in his kibbutz, Karmiya, south of Ashkelon. My heart skipped a beat and my jaw dropped - what a mega bird, first for WP and first modern record (previous records were in Cape Verde Islands in 1897 and 1924, per Tarsiger). I was on my way to a family event, and simply could not go! Aargh! Of course my good friends who twitched the bird successfully sent me lots of happy photos. But I kept my cool and waited for this morning. I picked my brother up from Jerusalem, and with our two elders we headed down to the south. We arrived there a bit late, to the negative news that the bird was nowhere to be found. We scanned the kibbutz and nearby woodland for a couple of negative hours.Thoughts of a painful dip crept into my mind, when it was refound inside the kibbutz. We raced there and sighed with relief when the bird was perched high on top a tall Eucalptus. Phew...

We watched the bird in awe for a while, from a carpark between houses... At first it was not doing much, then it started moving around a bit. It looked very well, in perfect shape, and not really disturbed by humans because of its tall perches. 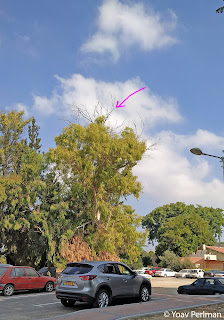 After getting a first set of photos, somewhat distant and shaky, it was time to improve the results. This was not going to be a photo competition winner with the bird constantly perched on top of tall trees against the sky, but with some patience the bird started foraging more actively and eventually ended up at least on lower trees. 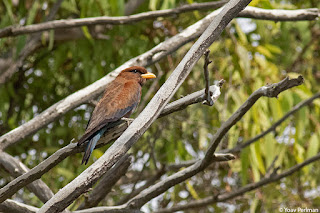 I think it belongs to the northern subspecies afer or aethiopicus, due to its darker central tail feathers and blotchy underparts 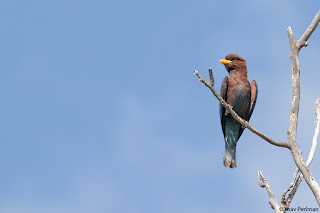 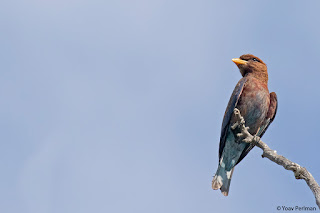 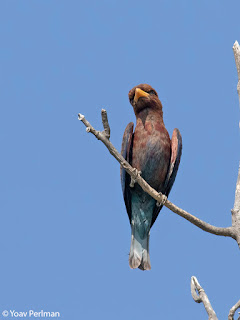 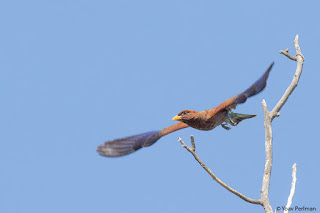 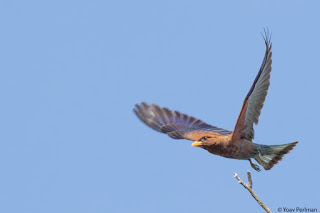 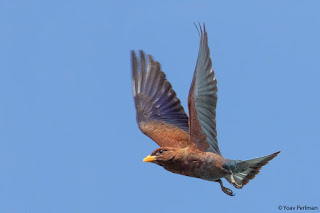 Quite amazing to watch a second first for Israel within few weeks, shortly after receiving another African gem - White-throated Bee-eater. The broad-billed Roller breeds across Africa, including the Sahel zone and arid parts of NE Africa, and migrates internally in Africa. Quite similar distribution and movements to the bee-eater - did they arrive riding the same winds?

Many thanks to Gabriel for this great find, and to the lovely people of Kibbutz Karmiya for hosting the party so generously. My brother Gidon and the boys Uri and Shachar were great companions - cheers!
While scanning the kibbutz for the roller we saw some fine birds. Then they were of no interest whatsoever, but now I can appreciate the orioles, hobbies and other stuff we had. eBird checklist here.
פורסם על ידי Yoav Perlman ב- 3:09 PM