On August 13th, while I was in the UK, the first White-throated Bee-eater for Israel (and 3rd for WP) was found north of Eilat by Sara Deutch and the Shiff couple. During my stay in the UK I was biting my nails constantly. Will it stay? Every morning I switched my phone on, and every morning the news came through that it was still present. I kept all my 20 fingers crossed tightly, and indeed on the day of our flight back, yesterday, it was still there. I arrived back home at 23:00 last night, after a long journey. Kids needed food, showers, bed-time stories etc., I unpacked my birding gear and after a short snooze headed out at 02:30. Met up with Rony, Re'a and Tamar, and together we cruised through the night to arrive at dawn on site, west of KM20 saltpans. A few more birders assembled, and we started searching the vast area for the star bird. For the first couple of hours there was no sign of it, and I was getting worried - several of my friends had tried for it multiple times and failed. Was it going to be a dip? Then, luckily, Re'a and Tamar had it briefly in flight. A short while later I saw the smallish bee-eater briefly in flight too - so mobile! But phew: lifer, WP and Israel tick under the belt. I was keen to get better views and maybe even a photo, but it kept disappearing and was lost again for another hour or so. Eventually Eran, Tuvia et al. found it foraging deep inside a date plantation, where we all had fantastic views. What a cracker! We watched it for a while, happily catching wasps and bees very efficiently, then let it be.
Seeing such a rare bird so well was a real treat. I feel very grateful that this African gem waited especially for me - thank you, much appreciated. 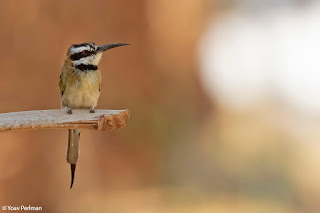 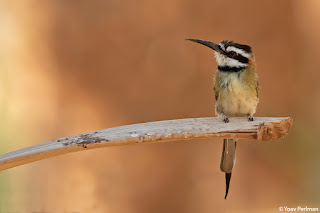 Even after almost two weeks on site, the bee-eater attracts quite a lot of international interest. My Twitter and Facebook BOC posts performed rather well:

Thank you Mr. White-throated Bee-eater for doing the decent thing and waiting for me pic.twitter.com/53KKIBLDsG
— Yoav Perlman (@yoavperlman) August 24, 2019

Of course the bee-eater was not the only bird we saw. While searching for the bee-eater I bumped into the equally long-staying Hypocolius. I saw it at some distance, into the sun, so no photos but always a quality bird to see. A quick drive around the saltpans produced Hoopoe Lark, Broad-billed Sandpiper, Citrine Wagtail and actually lots of migrant passerines in the plantations and scrub, including Lesser Grey Shrike. All in all a respectable 69 species - check our eBird checklist here. 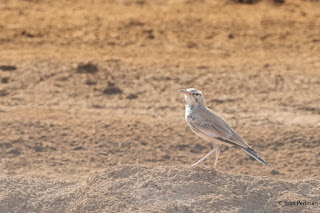 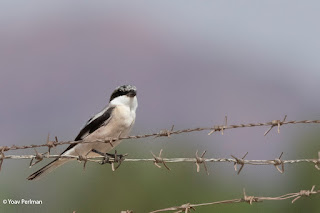 I had to return home early, so we headed back before noon. Driving through the Negev, I spotted a large raptor circling over the road - Golden Eagle! We had rather pornographic views of the beast, presumably a male, eyeballing us - fantastic experience. 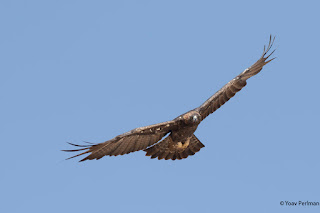 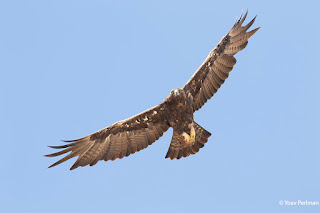 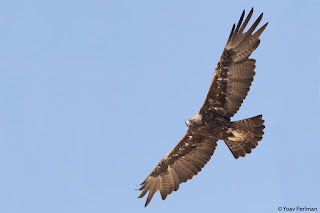 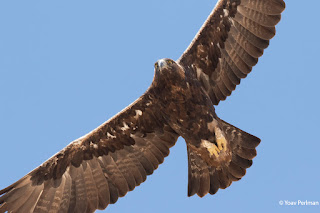 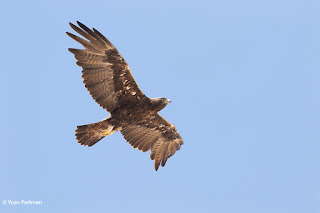 Many thanks also to Rony, Re'a, Tamar, Tuvia, Shachar and all the other birders who shared this special morning with me.
פורסם על ידי Yoav Perlman ב- 8:46 PM