Yesterday I joined the annual birders' special pelagic into the Gulf of Aqaba, organised by IBRCE. I met up with Klil in the middle of the night, and we drove the long way down to Eilat. After a quick visit to North Beach, we assembled at the marina. A Sooty Falcon cut the air low overhead as we boarded the boat - surely an omen of good luck. We set off towards the border-triangle of Israel, Jordan and Egypt, basically as deep as we could go without a passport. We chummed for a couple of hours, but no tubenose came in, though there was rather good tern activity with two Bridled, two Lesser Crested and many White-cheeked Terns. Nice, but no cigar. 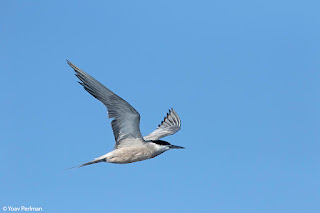 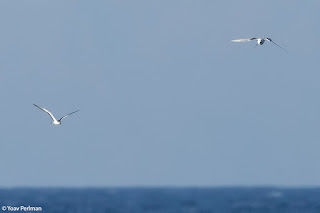 After a couple of frustrating hours, I was starting to fear a repeat of last years' failure (it was so depressing I didn't even blog about it). Finally, Daniel and Shachar spotted a distant all-dark storm-petrel flying across the gulf. Adrenalin! I got onto it quickly, and stayed on it for 5-6 seconds until it disappeared. I tried to take in as many plumage details and flight action. I managed to see it lacked a white rump, and the combination of fairly large size and powerful flight in straight line all helped us to identify it as Swinhoe's Storm-Petrel - boom! I was over the moon with excitement - a full fat global lifer, and one of my most wanted in Israel. Yet I felt for about half of the crew that did not manage to get on the bird. I was hoping for better views, so I was left slightly under-satisfied by the low quality of observation and no photos - something to improve next time maybe.

Throughout our stay at the chum spot we enjoyed brilliant activity of a Risso's Dolphin pod - about 8 animals, maybe more. They were hanging around just behind the international border, so we couldn't approach them much closer. They are such unique animals. The mature adults get extremely pale silvery-grey, and wear their dorsal fin off. 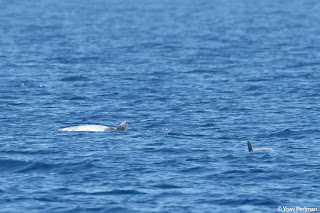 This one is dark with full-size fin 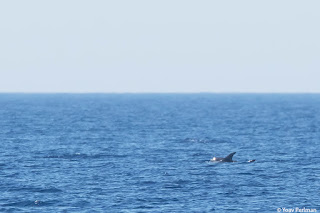 On the way back we hugged the coast, and enjoyed close views of White-eyed Gulls and White-cheeked Terns. White-cheeked Tern has become a regular breeding species in Eilat, and is seen in quite large numbers nowadays. 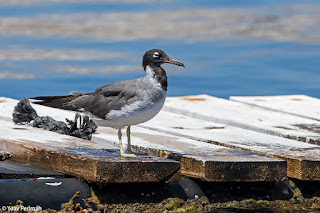 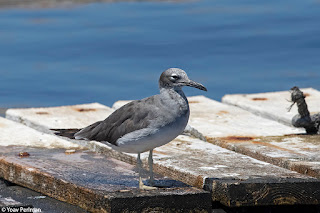 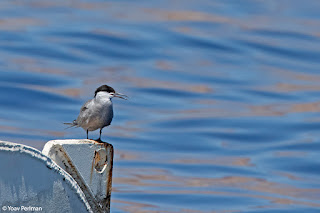 Eventually we returned to Eilat, quite exhausted but content - mission accomplished! eBird checklist here. Many thanks to Eitan the skipper who did an excellent job, and to Noam, Shachar and Libby who organised the trip.
Klil and me headed back home in the early afternoon. I was extremely tired driving, so decided to stop for birding (rather than powernap) at Yeleq Cistern. Nice activity of Sinai Rosefinches, also two Striolated Buntings. Most rosefinches were young, while fewer adult males and females came in, indicating a good breeding season for the species. This site is lovely but photography there is challenging. eBird checklist here. 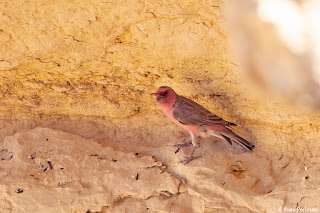 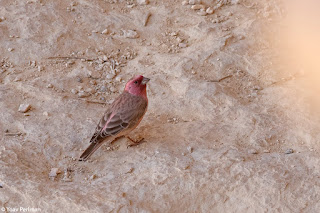 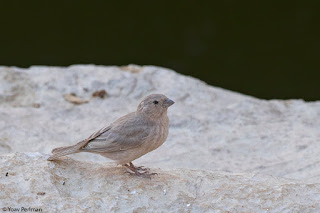 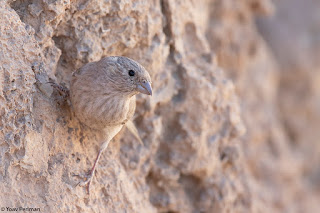