Well, Tel Aviv has not been moved to the Pacific Ocean yet, but it's been hosting a Pacific visitor in recent days. But first thing's first. I started off early with Barak B. at Hatzuk, hoping that at last today would be the day that the skies open and winter migrants pour through. Not today. In Israeli standards it was pretty quiet vismig-wise, with meager numbers of finches, wagtails and pipits. Also numbers on the ground were low. Highlights were few and not truly exciting - Richard's Pipit, Caspian Stonechat, 2 Indian Silverbills. The only poser was this Red-backed Shrike during the Golden Hour: 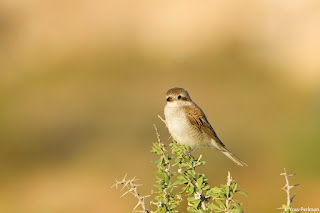 My full eBird checklist is here.

After we were done, we moved just a bit south to Tel Barukh beach, where a Pacific Golden Plover has taken up residence for a few days now on the Vermetid Reefs there:

During the short walk down from the carpark I spotted the plover from a distance, but then several dogs and their humans started running into the water. The bird flushed with a few more shorebirds, made several circuits along the super busy beach and disappeared into the adjacent airfield. Managed to grab some distant, horrible record shots, displaying the grey underwing coverts and axillaries: 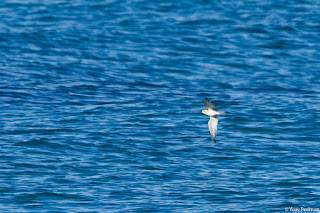 We then relocated the small mixed group inside the airfield, luckily just behind the boundary fence. I ignored the large red 'NO PHOTOGRAPHY!" sings and did my best - into the sun, through several thick barbed wire fences - less than ideal conditions. A few passers by were annoyed by thisdodgy activity, me breaching Israeli security like that. I had to give it up before airport security would be called on us. We waited around for a bit longer, hoping the plover and his mates would fly back to the reef where light is better, but it did not. 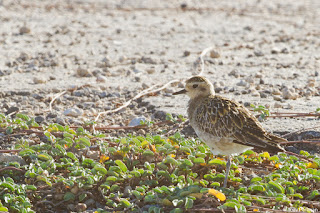 Pacific Golden Plover is rather rare in Israel, about 3-4 annually. Always nice to connect with this extreme migrant. This is surely a returning individual - last year one was seen here at the same time. PGP has featured on my blog several times before, including showy individuals here and here.
פורסם על ידי Yoav Perlman ב- 8:48 PM