Yesterday afternon news broke of a young Barnacle Goose at Agamon Hula. As with any wildfowl records, concerns about its origins were raised based on poor quality photos. Later on, when better photos emerged, no plumage anomalies were visible, the bird was properly wary, it's circumstances (age, timing and location) support genuine vagrancy, and the species certainly has good vagrancy potential with accepted records in Greece, Turkey and Egypt.
I had no plans to twitch it today - a couple of important meetings were planned in the morning, and in the afternoon I had a family event to attend. Miraculously, the early morning meeting was cancelled last night, and it didn't take much effort to persuade my boss, who normally does not twitch, to arrive at our second meeting after a detour to Agamon Hula. We got there mid-morning and joined the small crowd of 10 twitchers... The bird was on show, at safe scope distance. Phew. We were lucky - shortly after we left the bird was flushed (by farmers or twitchers) and not relocated since, to the anguish of lazier twitchers.
What a lovely bird - I really hope and think it should make it onto our national list. These images were taken on our way out, from inside a car on a public road at a distance of about 150 m: 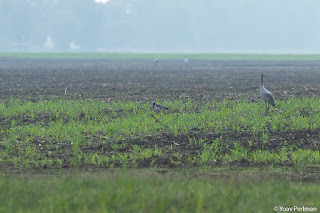 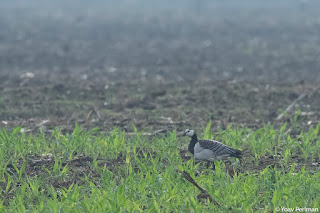 We were in the Agamon for just over an hour, and focused mainly on the goose. Just behind where we were stood, on the other side of the canal, a Daurian Shrike was showing well albeit at a distance: 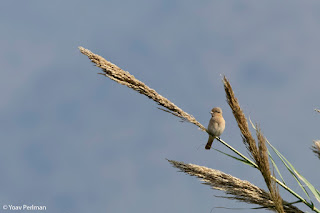 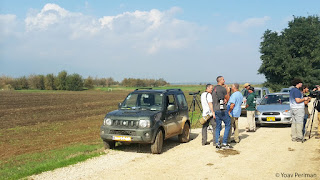 We had to leave too quickly to make it on time to our next meeting, so we ignored a fantastic alfalfa field we drove past that had Eastern Imperial and 4 Greater Spotted Eagles, tons of Great Egrets and storks etc., we ignored the water body, and a Demoiselle Crane in the crane feeding area. Still we managed a respectable 67 species in our eBird checklist (check here) - officially it's a complete list but in practice could have increased in another 40 species if we had another hour to bird.

Thanks to Dan for the company and driving, and to Agamon stuff for their patience...
פורסם על ידי Yoav Perlman ב- 10:39 PM