Champions of the Flyway - final days

After all COTF teams handed in their lists and we got everything sorted for the awards ceremony, I had time for few hours of sleep. But I could not sleep in on my last morning in Eilat, especially with so many sites I had no time to visit this week. Dawn found me in Holland Park. At first it was quiet with both birds and birders; then things livened up with quite many migrants and some fresh colour thrown in the mix too. The famous Caparis decidua bushes at the top of the wadi were packed with common warblers, and one Rueppel's. Several Balkan Warblers called loudly from the nearby acaciae. A male Striolated Bunting sang beautifully from a nearby rocky slope. Suddenly the distinctive call of Blue-cheeked Bee-eater echoed back from the hills - and here they were, three brilliant beauties. Not too rare but always breathtaking. 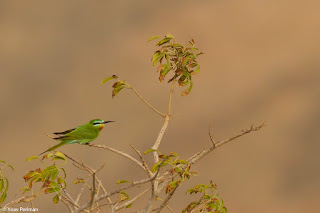 Lucky shot with my shambolic camera 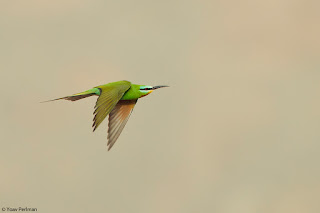 For a moment they interacted with their little cousins, now called Arabian Green Bee-eaters - not too shabby either: 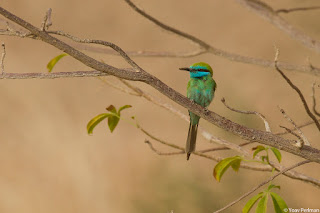 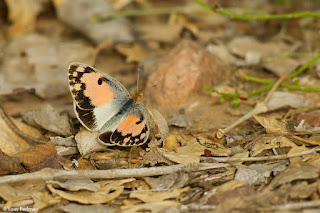 Then it was the traditional group photo at North Beach, constantly interrupted by passing birds:

The award ceremony was a celebration of global comradeship and hope. Well done to the award winners - Birding Ecotours World Youth Birders with their record-breaking score and #Gees, Zeiss Yorkshire Terriers for out-of-this-world fundraising, Leica Welsh Red Kites for being so prominent in getting the message out, but a special shout-out to all the kids and women who took part in the race, especially Team Spectacled who received an award for their special efforts and contribution, and Little Bastards who came second with an amazing high score (183 species!). Noam and the Israeli - Palestinian team Palestine Sunbirders did an incredible job too, showing the world that Palestinians and Israelis can do great things together. Of course, the true winners are the birds of the flyway, this year receiving much-needed protection from our comrades in Serbia and Croatia. Good luck guys with your important work.

So proud to be part of the team making this inspirational project happen, year after year. My contribution to the project is rather minimal, so hats off mainly to Jonathan, Dan and IBRCE for doing the major part. Many thanks to all those who donated to the cause - you are all stars! And to our supporters in BirdLife International, Swarovski Optik, Leica and Zeiss.

After the race I headed up to Jerusalem to spend little time with my family there. In my final morning I had to see some birds and spent an hour at JBO. Good to meet up there with most of team JBO / Manomet Rocking Redstart who certainly rocked the flyway with their efforts. 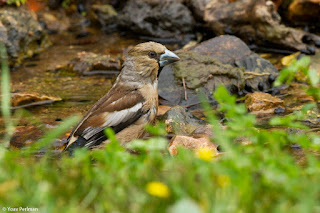 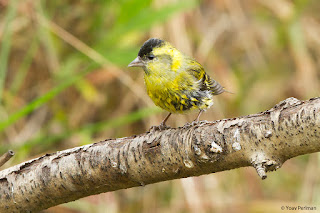 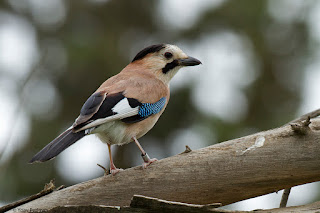