What a bird and what a way to start my day. Switched my phone on in the morning to see message from James - 'Firecrest singing in my garden!', accompanied by a stunning photo. I have seen many Firescrests before, including the one and only (to date) in Israel, but never managed to get a decent photograph. Understanding that I might have a chance here, and in UK context it is a scarce bird, I carried my gear with me doing schoolrun, and then headed over to James's. Was greeted by good coffee and warm hospitality, and very quickly the bird was performing. A stunning male. Jaw-dropping, almost like an flippin' Blackburnian Warbler. He was singing constantly and apparently holding territory between a large spruce and an apple tree, complete with crest-pumping. He was constantly chasing the local Goldcrests and was being chased by them. Will it find a mate and breed here? He was quite a feisty little thing, moving constantly and not so easy to photograph, but eventually 'we nailed him' as they say. 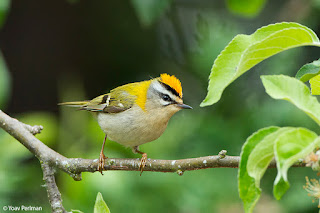 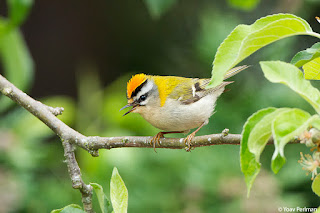 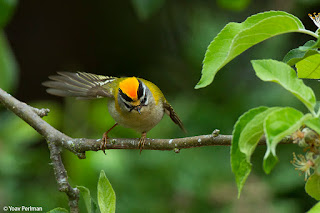 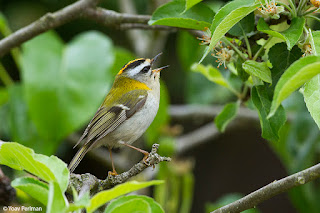 Goldcrests are usually personal favourites, but today they were clearly shadowed by the real deal: 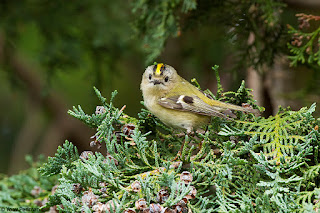 Urban birding at its best! I am proud to be the first avian twitcher in James's garden - he has had moth twitchers before. Thanks to Sharon for this photo. Someone should design a camera with a nose-cavity for large-nosed individuals like myself: 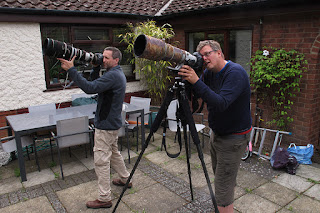