What a great day yesterday was. But first, good news - I think I have already overcome my jet-lag and I am delighted to announce that I had a good night's sleep.
Anyway, the night before was awful and I was grateful when the sun had come up over beautiful Vancouver. I just spent some time getting acquainted with common garden birds which was nice. Quite a lot of singing stuff. I think Bewick's Wren was a new bird for me... 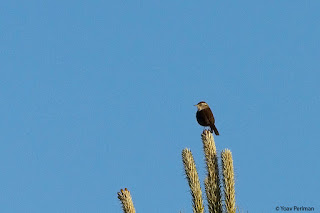 After breakfast we headed out and caught the ferry to Nanaimo. While waiting for the ferry one Audobon's Warbler was singing in tall tress on a slope above the road. Though we did spend all of the crossing on the deck watching out, there were rather few birds. Some first Marbled Murrelets and Common Murres, Pacific and Common Loons, a few rafts of Surf Scoter but no marine mammals. 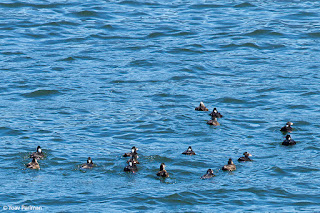 We started making our was north along the coast and made a few enjoyable stops. Englishman River Estuary was really good with lots of birds and good variety. Geese included quite many Black Brants, 6 Cackling Geese and a lone White-fronted Goose - I have no idea which form to expect here: 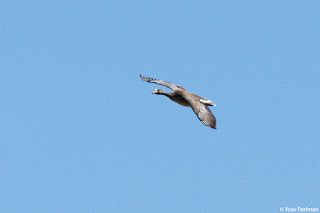 Ducks were in good variety too with Harlequins, Buffleheads, Goosanders, Red-breasted Mergansers, one Long-tailed Duck etc. Not too many shorebirds but we had a tame group of c. 30 Western Sandpipers - so pretty in summer plumage: 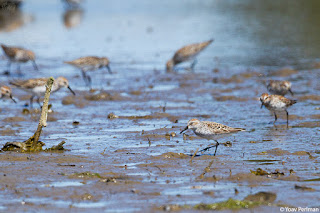 There was a larch concentration of gulls there. Among the masses of Glaucous-winged there was one Kumlien's Gull (need to confirm that - couldn't get a photo of it), American Herrings, Mew, California and Western Gulls.

Glaucous-winged, Mew and Bonaparte's Gulls, maybe a western on the left? 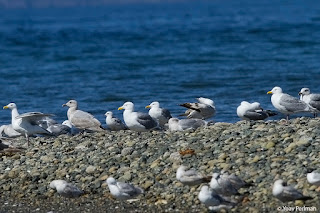 California Gull. Not sure about its age. Pretty fresh primaries and no moult yet, but already pretty bleached median coverts: 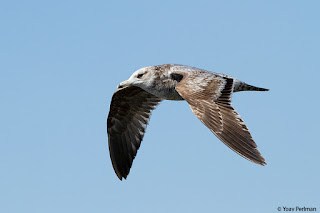 A group of the sweet tern-like Bonaparte's Gulls were foraging close in a funny fashion that included small springs and dives head-in: 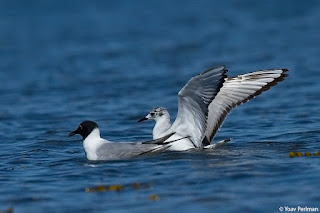 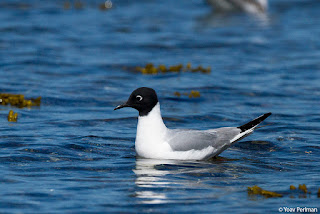 Not too many passerines around, some hirundines and a small group of Savanna Sparrows: 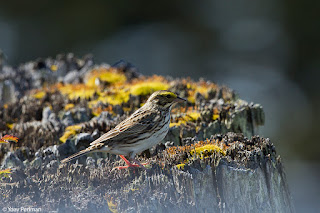 Dedicated to my friends in the UK who dipped or didn't go for the one in Cheshire the other day: 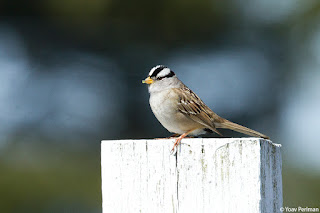 When we finished the circuit and arrived on the beach, Gidon was ahead of me and Amir, we were wasting time on photography. Gidon ran back to us: Orcas! We caught up with him - a pod of about five Orcas swam gracefully across the bay, too distant for photography but boy, these long dorsal fins... My first Orcas so I was pretty chuffed, stunning animals. 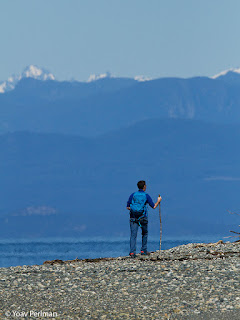 Little Qualicum River Estuary was also good with more gulls and ducks. I am just crazy about Harlequin, stunning birds: 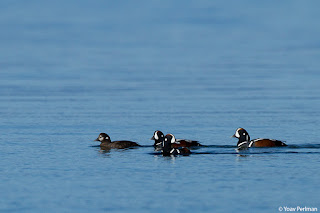 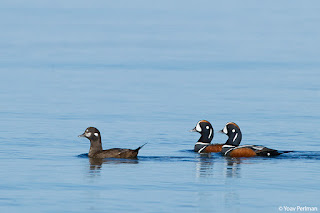 Qualicum Bay was also just packed with birds. Huge numbers of loons, grebes, seaducks, alcids - I really enjoyed it. Also quite many Harbour Seals and Harbour Porpoises swimming about. Superb. Three species of scoter, Red-necked and Slavonian Grebes, Cassin's, Marbled Murrelets and Pigeon Guillemots, and lots more - great stuff.
At Fanny Bay the California Sea Lions were entertaining. The males roar is quite something, what a resonance box they must have... 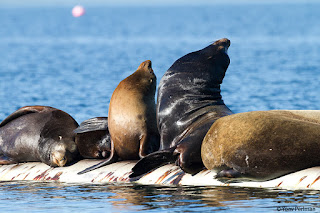 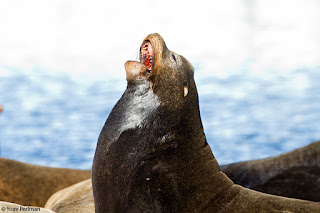 In the evening we finally made it to Campbell River. As we checked in we got intel about Orcas that should be heading our was in front of our accommodation. We sat on the porch, enjoyed the sunset over the beautiful bay. We didn't see the orcas (did add Rhinocerus Auklets) but it was a lovely end to a great day.
פורסם על ידי Yoav Perlman ב- 2:56 PM