BC day 10 - final day in Vancouver

Now I'm back home in the UK, and it's time to report of my final morning in Vancouver on Monday. I spent a few recreational hours with my sister in law in two beautiful Vancouver city parks, Pacific Spirit and Stanley Park. In both we mainly cycled leisurely along the beach, but I did notice that there were notably more migrants in. I had 5-6 Orange-crowned Warblers and 4 Warbling Vireos that I had not seen there before. Also higher numbers of Audobon's, Black-throated Gray and Wilson's Warblers, and a single Townsend's too. However my highlight of the morning was an encounter with a Common Raccoon (Procyon lotor). I know it is a common animal and had seen several briefly in the past, but this individual was extremely tame and showy in broad daylight. In a similar manner to Black Bear, it patrolled the rocky shoreline at low tide and fed on crabs. It is not a powerful bear so it couldn't turn over rocks. It rather stretched its long front paws under rocks and scooped out crabs. 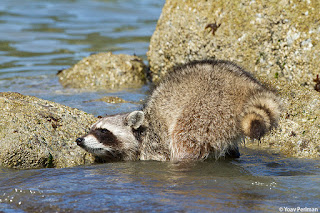 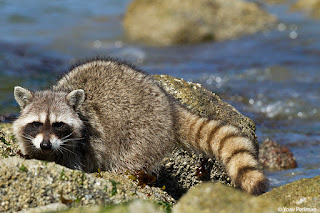 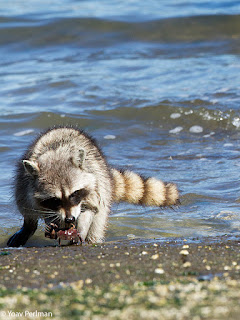 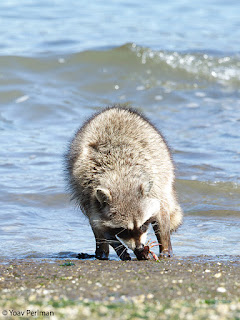 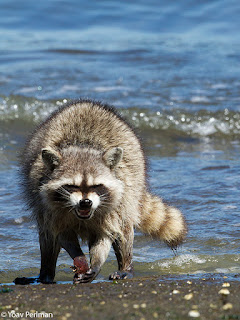 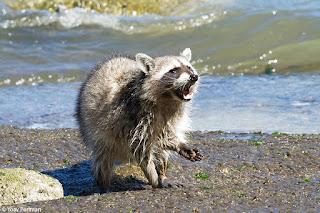 It is quite a comic animal that uses often its hands, and has a weird, drunken walk. It think it looks funny with those skinny wet legs and humped back: 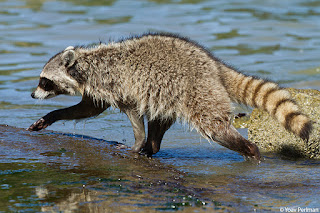 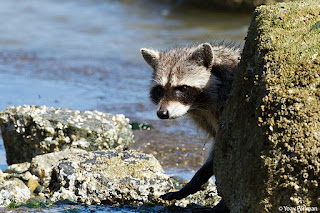 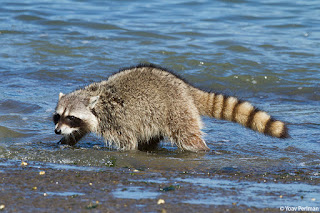 It walked past a Great Blue Heron that was utterly uninterested in it: 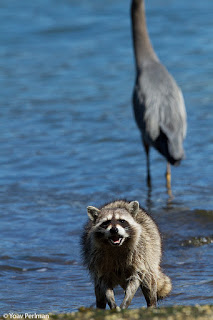 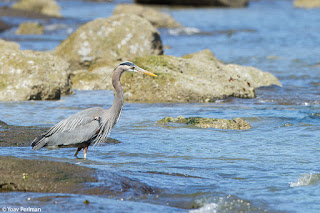 I think I also entertained the passers by, rolling in the mud with my big lens - a comic figure as well.
In Stanley Park I found a dead Western Grebe on the coastal road - pretty bizarre. Too revolting to share here. There was also this Cackling Goose on Lost Lagoon. I have seen quite a few during my visit here but they all behaved like proper wild geese. This individual was at first associating with the plastic Canada Geese there, but as soon as it had noticed I had my eye on it, it started moving away from me quickly and was clearly alarmed by my presence. Not sure if it's plastic or not. 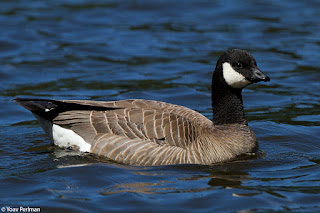 And that was that. British Columbia was great. Breathtaking scenery, and some great wildlife experiences (the bears were my personal highlight). Seabirding and shorebirding was alright but there were painfully few migrant landbirds. Ah well, can't complain I guess. Many thanks to my brother Gidon and his family for their warm hospitality, and to Amir for another great trip together. Looking forward to the next adventure!
פורסם על ידי Yoav Perlman ב- 11:48 PM