Eilat Festival update - what a day!

Yesterday was a bird-packed day. Hadn't done the day list yet, but I hope the bird racers next week will have such a good time!
My tour began in the late morning, so I started birding solo early. First north beach - lots of Finns and some birds too. The Brown Booby was patrolling along the Jordanian border, one Arctic Skua flew over, Barbary Falcon was after the Garganeys, two Heuglin's Gulls etc. 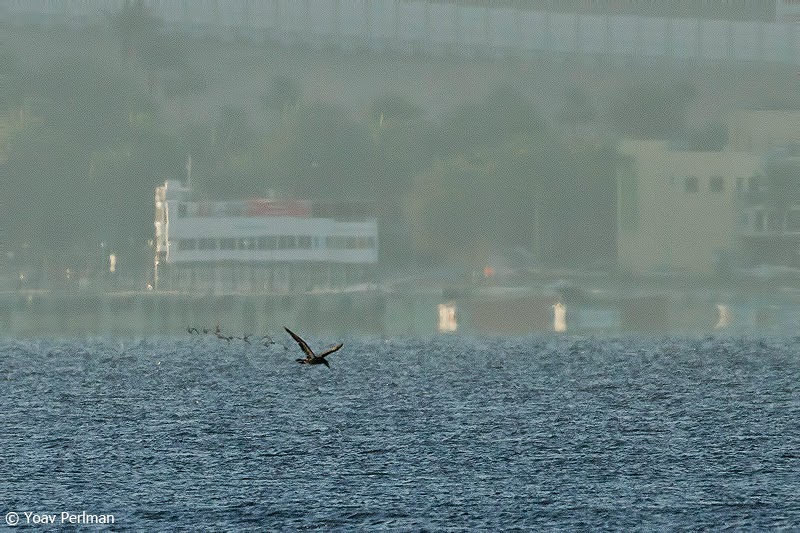 Then I quickly checked KM20 saltpans - lots of shorebirds but nothing more exciting than Greater Sand-plover and Marsh Sandpipers. Outside the saltpans had this lovely flock of European Bee-eaters - added much-needed colour to migration: 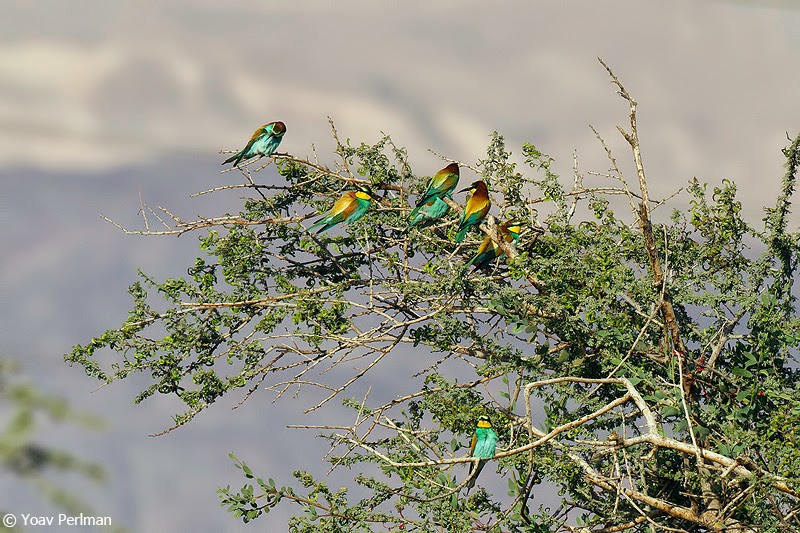 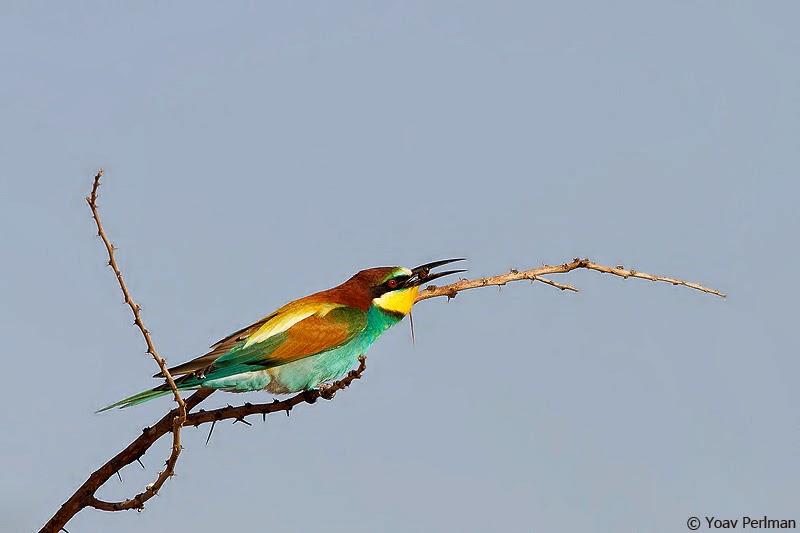 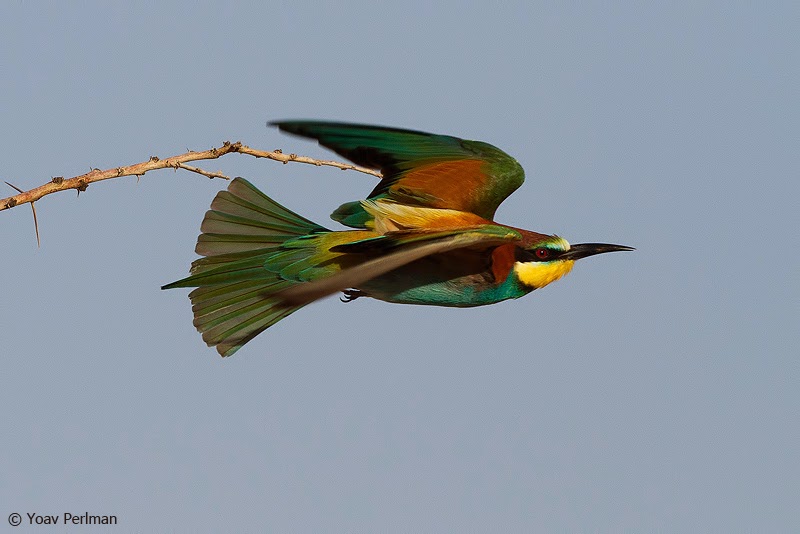 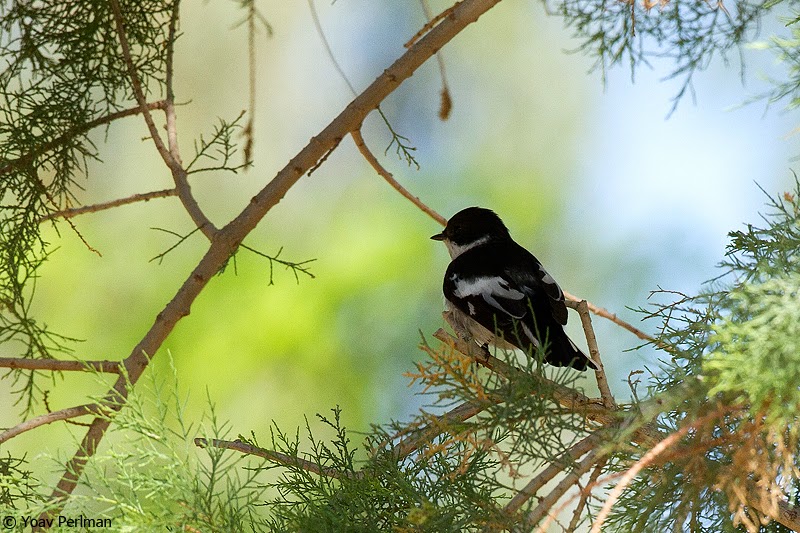 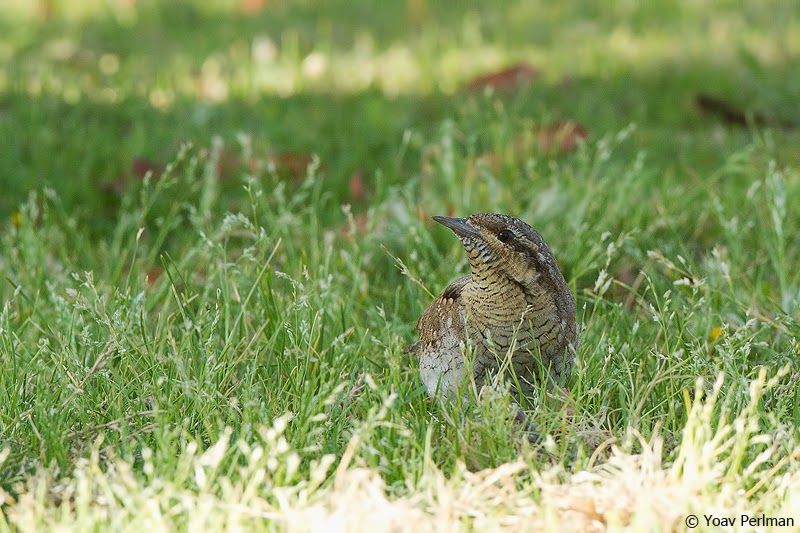 After breakfast our long-distance tour began. Our first stop was at Yotvata - a Caspian Plover had been fund earlier on by British birders. We got to ths site and all the clients were on the bird quickly. It was a fine male, but it crouched down in the middle of a dry field, and viewing it through heavy heat haze was, well, you know... Here is a poor record shot of him: 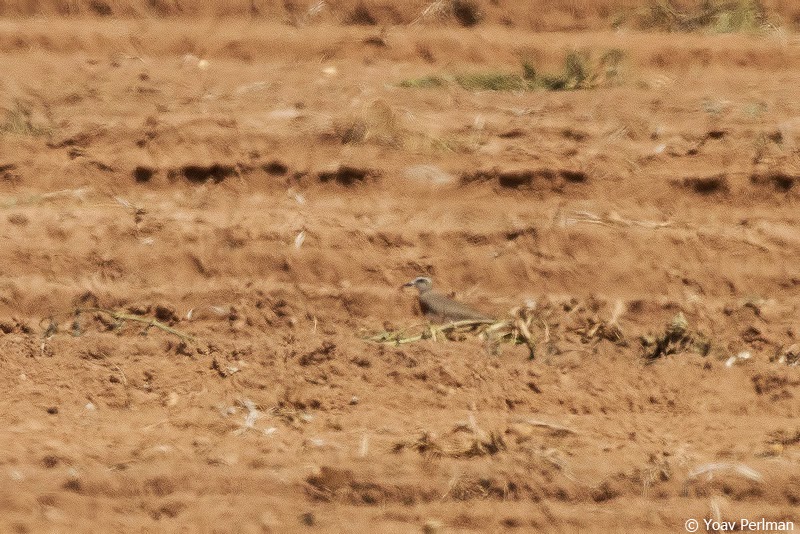 While watching the plover good raptor migartion was happening overhead - Steppe and Booted Eagles, Several Lesser Kestrels plus lots of the commoner species. 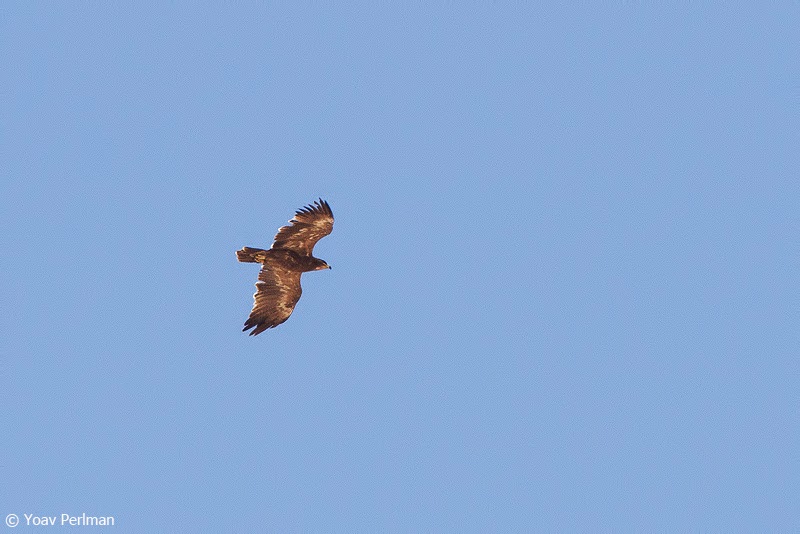 After Yotvata we drove to Hazeva where we met up with Ayla and Andrew who work there on the babblers. They took us to see a habituated group, which was great. But the main attraction was a pair of Arabian Warblers that showed very well - not the best images I have of them but the views were very good, and again - satisfied clients. 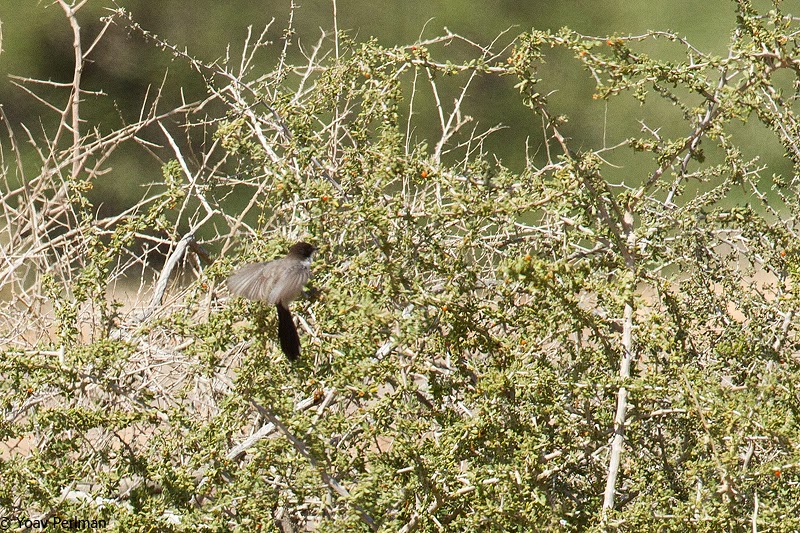 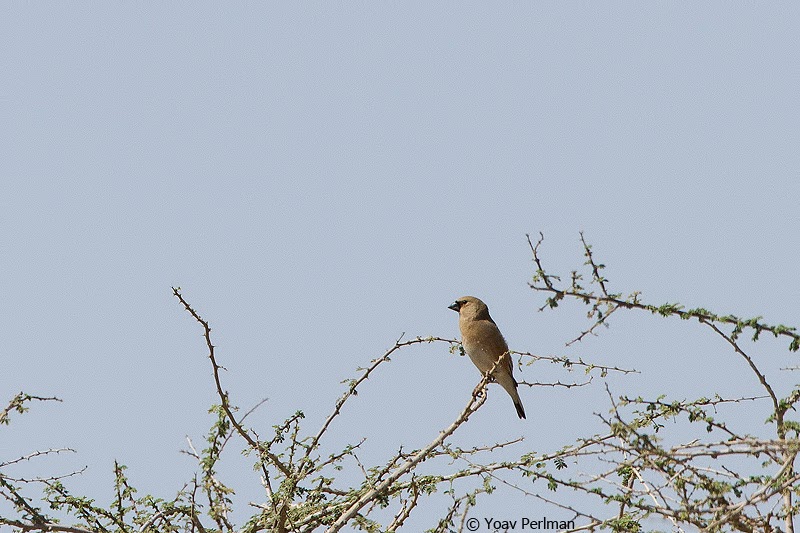 Eastern Imperial Eagle - into the sun - this one had jesses on his legs, must have escaped from trappers 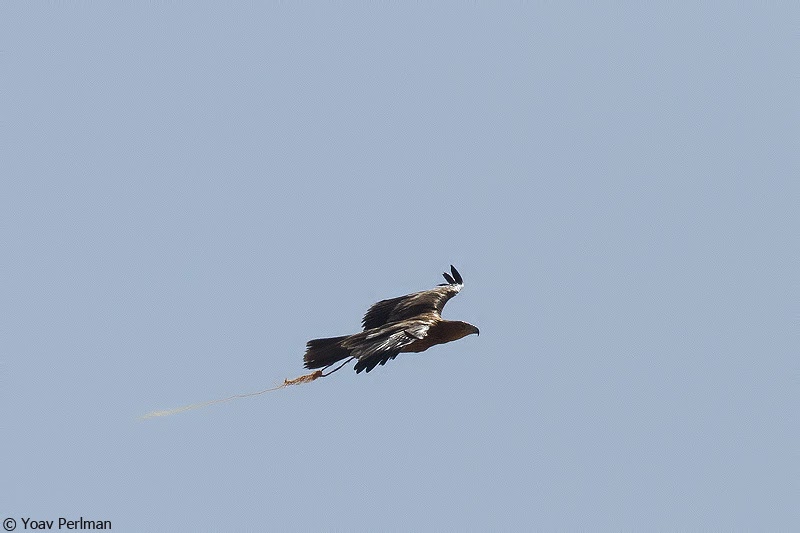 On the way out bumped into this obliging female Namaqua Dove: 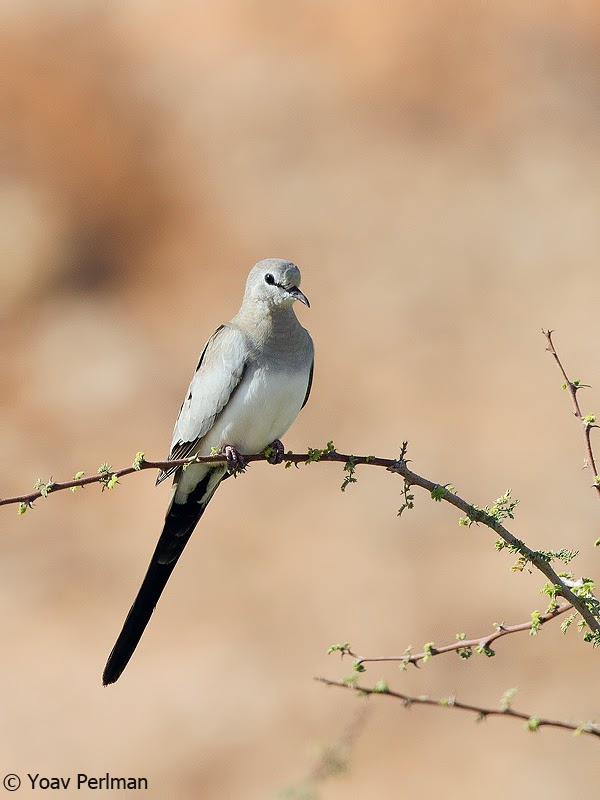 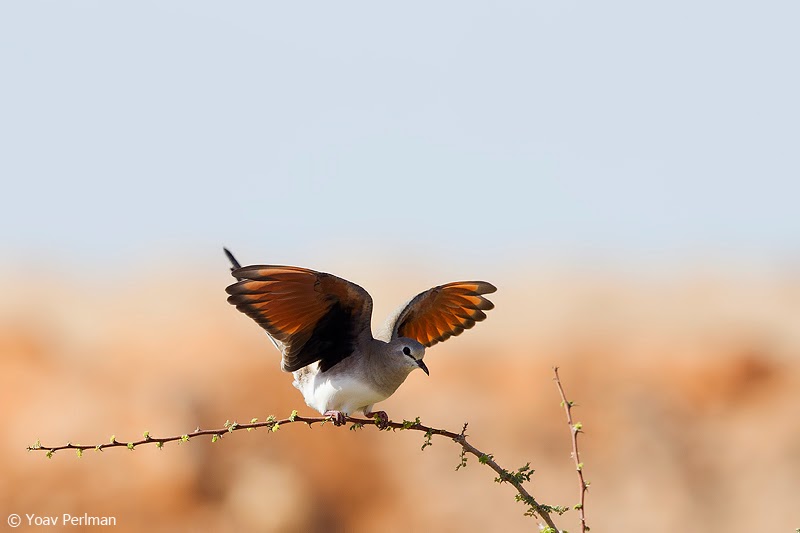 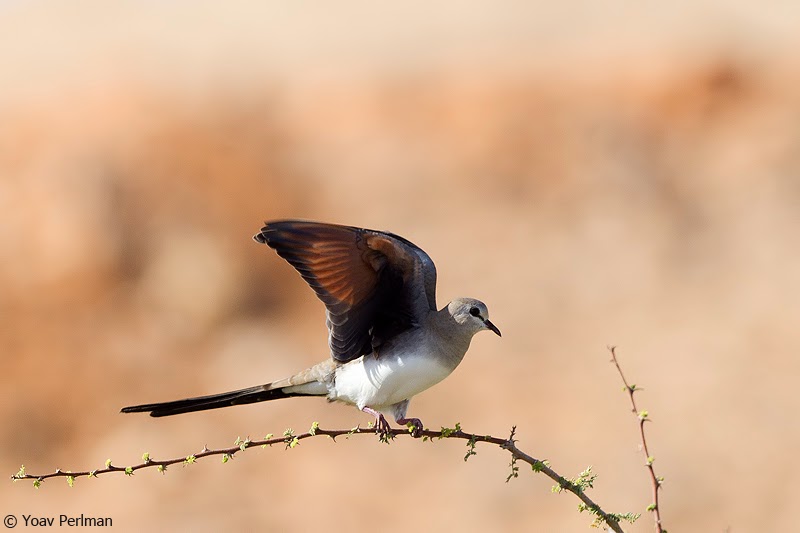 Then we drove up to the Judean Desert. We first went into a beautiful wadi. We climbed down before dusk and did some general birding in the wadi, that was fun with typical desert species and tons of raptors coming down to roost on the tall cliffs. After dusk we had a pair of Hume's Owl calling and communicating with each other. Rather early the male flew over our heads and we all had great flight views, and later on we all saw him very well, holding a rodent in his mouth. I was holding the torch (as always) so here is a great phonescoped shot by IBRCE volunteer Bas Kok  - thanks Bas for letting me to use your image here: 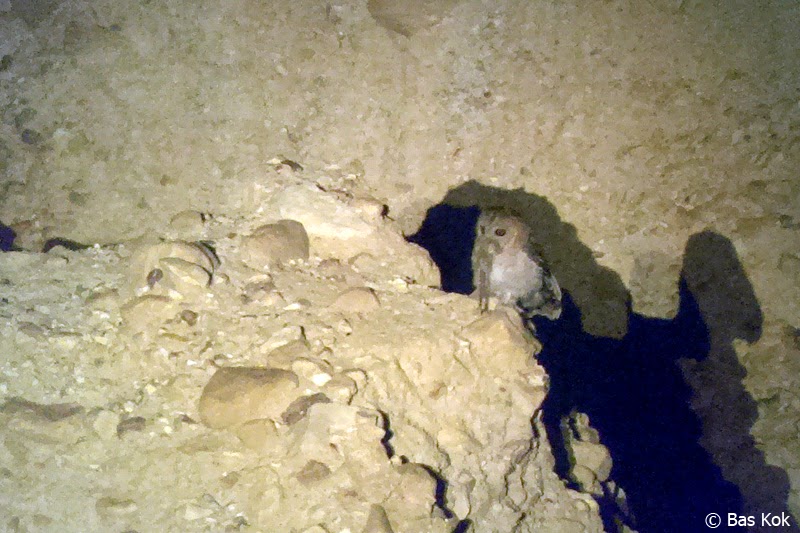 Very statisfied we left the wadi, and after dinner we headed down to Neot Hakikar. We arrived there when it was already too cold and dark, so there were no nightjars foraging whatsoever. After a couple of hours of intensive searching we had to give up but just before leaving we enjoyed several singing Nubian Nightjars around us - nice experience (though I'd rather see one than hear three...). However a major bonus was a Pharaoh Eagle Owl that gave several brief views.
The tour ended very late and the clients got back to Eilat very late at night, after a long but satisfying 'Rambo Tour'.
Many thanks to my co-leaders - Naom, Meidad and Paul, and to the IBRCE volunteers for the good company in the car.
פורסם על ידי Yoav Perlman ב- 10:34 AM