Israel (and the Middle East) experienced the most dramatic storm in about 100 years. This caused some disasters in parts of the country, especially in Jerusalem and Safed - heavy snowfall collapsed many trees that ripped powerlines. As a result tens of thousands of families were left electricity-less during the freezing cold storm. In my part of the country it didn't snow (too low) but rainfall was massive - about 300 mm of rain in three days; it just never stopped raining. My village was cut off for half a day after two trees collapsed on the main road and a tiny creek collected so much runoff water that it went overflowing, and blocked the road. We hosted some refugees who couldn't make it to Jerusalem (all roads to Jerusalem were closed for three days) - my brother's family and my mother, so our house became a refugee camp for the weekend. But it was nice and cosy, sometimes a bit too cosy.
Today the weather was fine at last and we could all go out. When I left home I was greeted with this fantastic view. Visibility was superb and I had these views of Hebron Mts. about 30 km away. 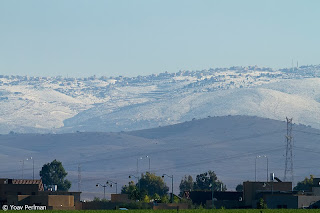 I was supposed to do a raptor monitoring transect this morning but the mud was so bad that I had no chance to do it, will have to wait for another day or two and let the mud dry up a bit. Instead I drove to look for the Steppe Grey Shrike Eyal Shochat found yesterday near Hanegev junction. For about an hour I couldn't see the bird despite intensive searching. Had some other birds while doing this. Two Desert Wheatears: 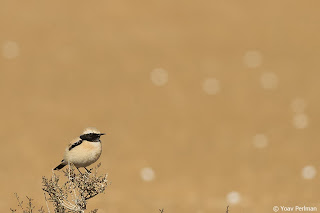 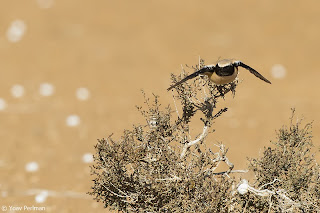 Two Finsch's Wheatears. This bird looks like a female but it sang continuously. Is it a 1cy male? 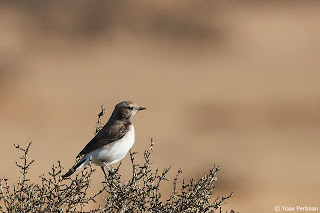 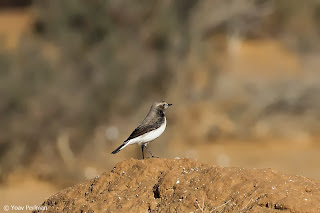 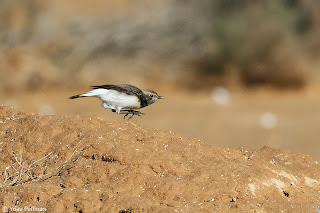 And a more classic male: 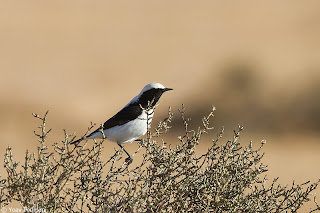 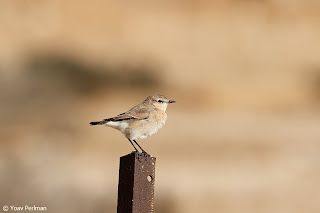 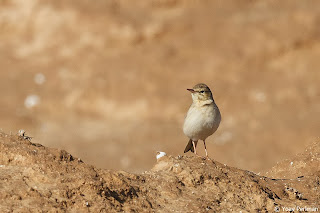 And two flyby Calandra Larks among a flock of skylarks.
Eventually I got in touch with the shrike. It was extremely mobile and shy. I had good enough views but photography was difficult - these are the only half-decent record shots I got: 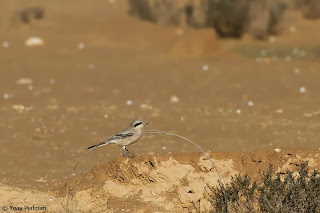 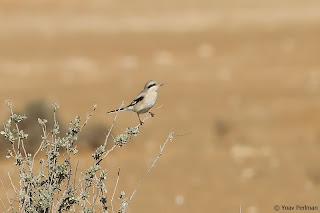 Steppe Grey Shrike is rare (but not mega) in autumn, typically in southern Israel, but there are only few winter records. though it must be overlooked in remote parts of the desert. Anyway, great find by Eyal, and a fine individual with this pinkish wash on underparts.
פורסם על ידי Yoav Perlman ב- 8:53 PM