My morning began with more raptor monitoring in the N Negev, in very fine weather. Took my two sons with me. The first hour was nice with a few Imperial Eagles and a Barbary Falcon. But at 09:46 I got an excited phone call from Tuvia Khan - he had just found Israel's first Snow Bunting at Acre with David Kotter! I had to decide fast what to do, and I decided to postpone the raptor stuff till tomorrow, and go for the bunting. I dropped the kids at their grandparents' place, met up with Rami M and headed north to Acre. Quite a long drive but thank god Israel is a small country (and my car is fast...) - took me just about 2 hours to get there. When we got there a small group of twitchers and both finders were already on the bird. Very quickly we were on it too (relief...) as it was feeding on the rocks near the waters' edge. As there were more twitchers on their way, we kept our distance from the bird not to disturb it. Hence my long-distance record shots. During the two hours or so I was there the bird showed on and off, feeding on the rocks and on the sandy bits, and flying around a bit. After we left other photographers had better conditions - see this great video by Liron Ziv for instance.
What a fantastic bird! Have seen them in N Europe several times before in summer and winter, but in Israel it's something else. Though not totally surprising (sort of annual in N Turkey in winter), this is a great find by Tuvia and David - congrats guys! Possibly this bird was driven south by the massive storm of last week. 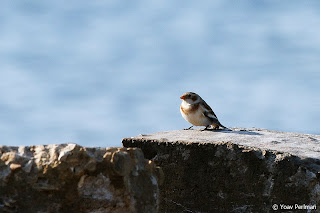 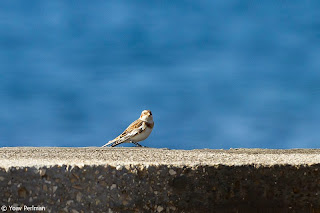 Some of the first twitchers on site: 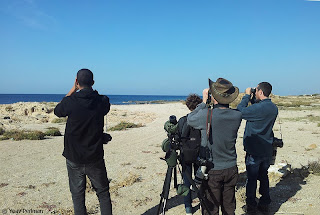 All the way from Holland for a bloody Snow Bunting?!?! 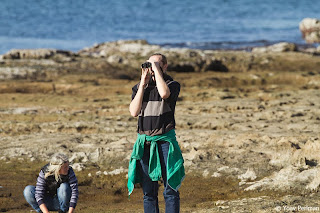 Acre beach is such a great site. Packed with birds and really under-birded. While we were there waiting around for the bunting to show I saw Yelkouan Shearwater, Arctic Skua, about 100 Golden Plovers, many gulls including 1cy Mediterranean, and lots more. Need to return soon for a full day.
פורסם על ידי Yoav Perlman ב- 9:48 PM