Here in Israel spring is already evident, with more and more migrants appearing, and in the desert breeding is already taking place in some species.
This is going to be a busy spring for me. I am coordinating to breeding bird atlas surveys - one in open scrub habitats ('Batha')n in the N Negev, and another on Mt. Hermon. On Wednesday had a look at Lahav reserve where the atlas project will take place. Just checked some different methods so didn't see much but found already three pairs of Spectacled Warbler nest-building and incubating, and a few Finsch's Wheatears.

Thursday evening and Friday morning I helped Meidad guiding his bird-guide training course at Nizzana. I gave a couple of presentations to his excellent trainees, and led a morning field excursion. At night, near our camp, we had a few singing Lilith Owls. In the morning I took them to my favourite hill overlooking some pristine, beautiful habitat south of Ezuz. We had there three dancing male MacQueen's Bustards. This hill has some ancient Nabatean rock carvings - really spiritual feeling to think how 2500 years ago people sat on the same hill and shared their observations with me. 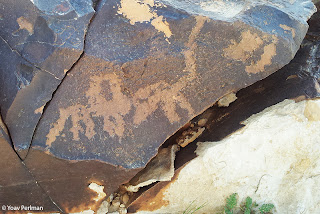 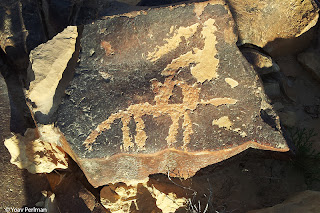 Later on we had another two dancing bustards, giving us all great views (but still to distant to photograph). Apart for that some coursers and Pin-tailed Sandgrouse. Enjoyed my first Eastern Black-eared Wheatear of the season. The desert is very green as a result of good rainfall - looking forward to another good breeding season.