After seeing  heinei-type at Titchwell, Norfolk, UK a couple of weeks ago, I started learning more about its ID. Martin Garner, Chris Gibbins, Jan Jorgensen and Mars Muusse were very helpful with this (thanks guys). Common Gulls are generally scarce in Israel. Until the late 1990's some tens wintered at Shifdan (Tel Aviv sewage works, that since had been converted from open ponds to a modern facility) and other gull hotspots on our Med coast. In recent decade numbers have dropped considerabely and nowadays we have normally less than 10 wintering in Israel every winter (my estimate). Shirihai mentions in his book (The Birds of Israel, 1996) that heinei is rare in Israel and few individuals with characters belonging to this taxon occur at Eilat and on the Med coast. I think that today we should be able to identify the better, and I am sure that based on its breeding range we should have many more heinei's in Israel.
On 6 January 2010 I birded with Amir, Ehud and Sassi at Ashdod. We found this very tame adult Common Gull on the beach, and at that time we were quite happy just to find one and didn't consider its subspecies at all. As it is a rarity I took some shots of it - to date the only Common Gull I have photographed in Israel. Looking back at the images, this bird certainly looks good for heinei.

Mantle tones: remember that even in mid-winter sunlight in Israel is much stronger than in NW Europe, so I guess that in Europe mantle tone of this bird would look much darker. But still it's dark enough - check the flight shot below.
Wing pattern: when perched, note that P10 to P8 are black all the way to the PC, giving a solid black wingtip. In nominate birds much grey is present on P9 and P8. In flight, note that also P7 has extensive black on outer web, almost reaching PC. 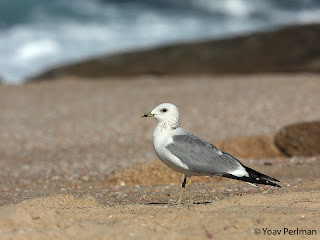 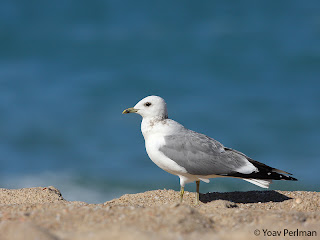 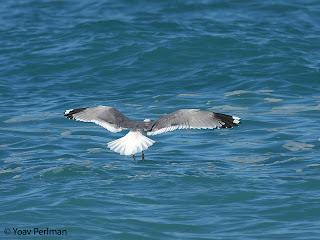 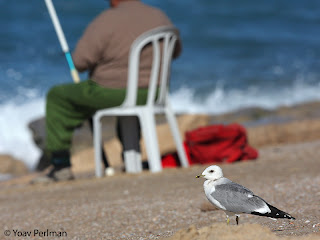 Many heinei have pale eyes in winter, but not all. This is a dark-eyed individual; don't know what proportion of heinei show dark eye but according to Chris Gibbins this is not unusual.

Certainly worth to keep an eye open for these guys in the future, also in earlier plumages. I wonder if there are any heinei records from Kuwait, UAE or anywhere else in our region?
פורסם על ידי Yoav Perlman ב- 12:28 PM