At last had time today for a full day of proper birding. Left early with Gert and Reinoud Vermoolen and we headed west to Zeeland. We met there Pim Wolf. Pim is just awesome - he really knows every bird and stone on Zeeland (though there are no stones on Zeeland).
We started off at the beach of Brouwersdam, despite the wind and cold. No sign of the hoped-for Great Northern Diver but lots of seaducks and divers. Highlights for me included two Long-tailed Ducks (male and female) that gave much better views than my previous bird, but still difficult to phtograph. Also five Velvet Scoters with the many commons, about 15 Slav Grebes, one Black-throated Diver among the numerous reds and two distant Ruddy Shelducks. Later on we found some Purple Sandpipers feeding on the rocky seawall - they are such tough little shorebirds. I really enjoyed watching this obliging individual fighting the waves. 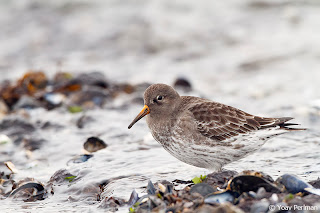 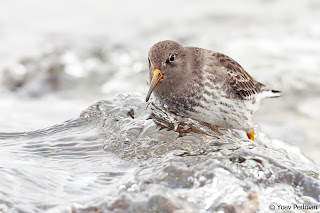 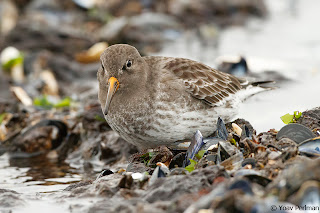 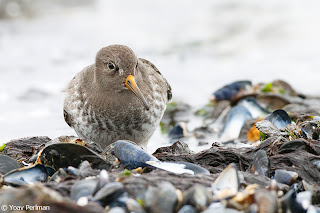 Something for my Israeli followers: 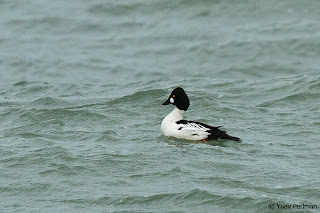 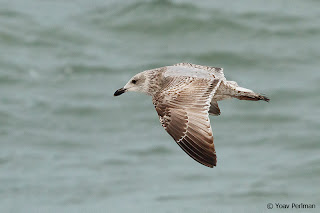 We continued working our way through the island, where we encountered huge numbers of geese. This was the goosiet day I've ever had. We had in total today 9 proper species of goose and another two plastic species. So at first we started scanning through the large flocks of white-fronts, barnacles, brent and bean. We found one Pink-footed, and then we found two Pale-bellied Brents at Scharendijke - here's a record shot of one of them: 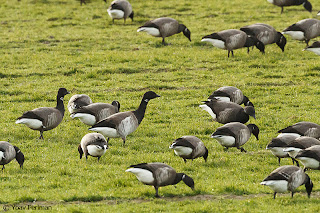 We continued birding and enjoyed a selection of geese, ducks and shorebirds, and some groups of Bewick's and Whooper Swans. Especially productive were the Polders south of Burgh-Haamstede. We had there some Hen Harriers, a Goshawk and best - a superb adult Black Brant. Much better than the two hybrids I had in the UK! Look at this full collar, almost connecting in the back of the neck. Also note how much the dark belly extends beyond the belly, and the solid dark mantle. 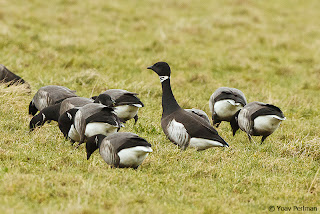 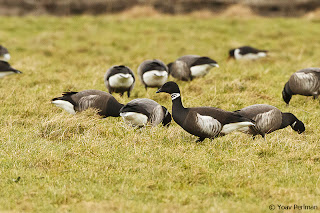 A bit east of Burgh-Haamstede we found this fine adult Rough-legged Buzzard as it was fighting the wind for some minutes. Great views but light was shit. 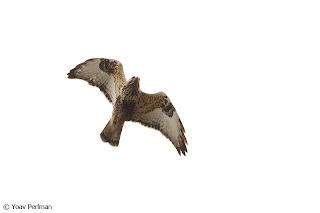 This is the best I managed to get of the uppertail pattern: 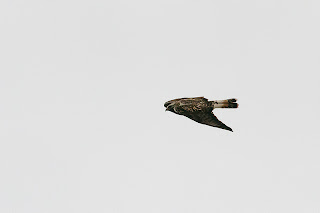 After we said goodbye to Pim, we headed to Oudeland van Strijen in very poor weather. Again tons of geese. Couldn't find the red-breasted that was showing there in the morning - I guess perhaps we were reluctant to work the geese outside of the car because of the rain. We did manage to locate two Lesser White-fronts though - good views but again poor light conditions so the images don't do them any justice - they are very smart-looking geese. 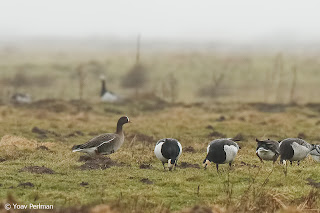 On the way back home checked the lake at Barendrecht but for the first time in eight winters the Bufflehead didn't show. Bummer.
But nevermind - it was a great day, good company, weather could have been better but could have been worse also. Tomorrow I return home - looking forward to some warm sunny weather. Many thanks to all of my friends and colleagues in UK & NL - BTO, Sovon, DBA, Gert, Martin, Tristan, Tormod, Chris, Nick, Andy, Rob, Vincent, Arjan, Reinoud and Pim are just few of the great people I met - you all made this trip highly successful and so much fun.
פורסם על ידי Yoav Perlman ב- 9:32 PM