Yesterday I had a long and slightly weird day. Left home just after midnight, met up with Ron, Yotam, Avner and Hillel and headed down to Yotvata. Our main reason for driving so far in such a crazy time of the night was to ring Oriental Skylarks. I have a long, unsolved business with this bird, after having them dodging my nets for so many years. This time we were pretty motivated and were sure we had good chances as 15 birds had been reported in the famous northern circular field in previous days.
We arrived at Yotvata just after 03:00 and as we drove in were greeted by a HUGE Striped Hyena walking across the field. What a beast! We started setting the nets up and everything was ready on time. Except for the birds. We had plenty of gulgula's in the field, but they just would not behave and in the end we did not catch not a single on. It's a pity, as this is possibly the largest documented concentration in Israel - we had 15-20 birds in total, with the largest group of 10 together. At least I got this record shot. 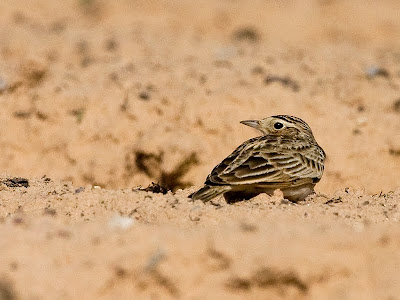 Otherwise ringing was pretty standard, only birds of note were two Desert Wheatears (ringing tick for me!). 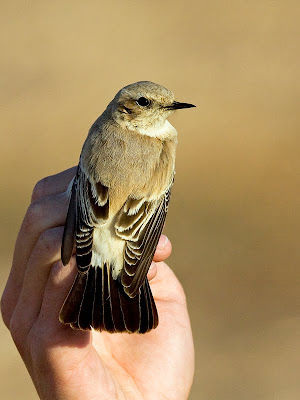 This is myself trying to persuade the farmer not to plough my nets: 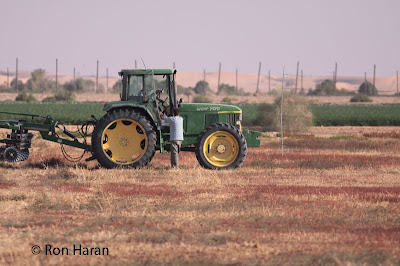 This field is so good and I'm sure it will produce more rarities in the next few days. We had the male Black-crowned Sparrow-Lark in flight, Lesser Short-toed Lark, 2 Richard's Pipits, 5 Siberian Stonechats and many other birds. It was good to meet Heikki and Tapio from Finland, and we birded together for a couple of hours, during which my car got bogged in the sand...
After the wind picked up and the farmers started working in the field, we left Yotvata and drove to Eilat to see the Grey Phalarope (it's grey! Not red! When they're in Iceland they can be named red, but here they're grey) at KM20 saltpans. It was as tame as always and showed very well. Cool bird! 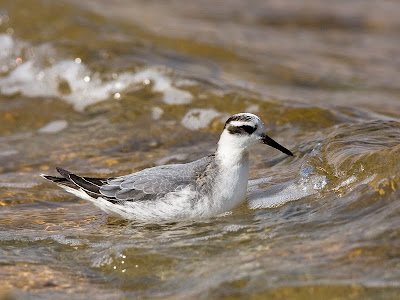 On the way back we had mixed feelings. On the one had, we failed to ring the skylarks and found nothing new, which was disappointing considering all the good birds around. On the other hand, how disapponting can a day be with Black-crowned Sparrow-Lark, Grey Phalarope, 15 Oriental Skylarks and a ringing tick be? Funny people we are, birders.
פורסם על ידי Yoav Perlman ב- 7:35 AM