It was another day of massive raptor migration today, and my house's position on the main highway rewarded me with brilliant migration overhead. I stepped outside and first bird I saw was a stonking Steppe Eagle, low over my garden. I ran back in to get my camera but I lost it. But there were tons of birds up in the air, so I stayed outside. It was around midday, so birds were very high up. Maybe no as spectacular views as I had a couple of days ago, but it felt so good, bringing back nostalgic memories of the many years I counted raptors for weeks every autumn as part of my job. It was such a great hour, actually 38 minutes of joy, that I think they're worthy of a blogpost. During those 38 minutes I counted 1456 raptors of 13 species. And when this happens in my garden, with a cold beer in my hand, I feel vert content. Main species were Black Kite 608, Lesser Spotted Eagle 454, Levant Sparrowhawk 368. Full eBird Checklist here. 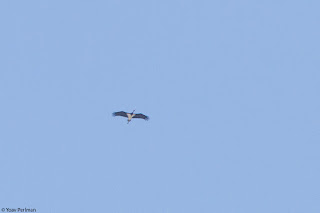 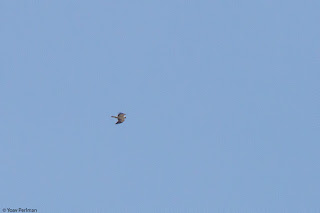 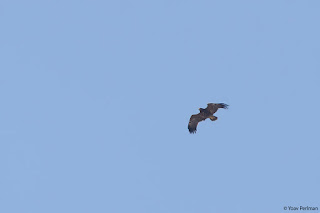 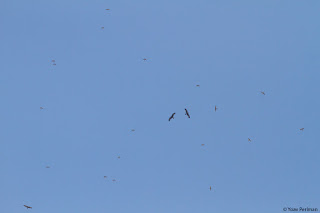 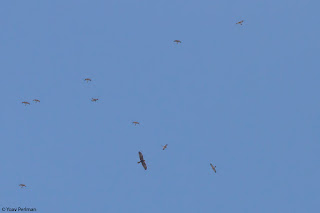 Unlike most other raptors that don't look down when they migrate, Short-toed Eagles often feed on the wing. I watched this youngster leave a stream, drop several hundred meters for a scan after a juicy snake, and moved on. 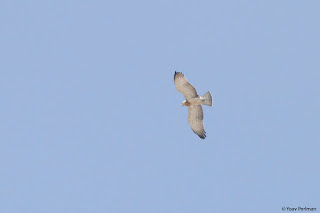 After 38 minutes I had to get inside (my daughter's birthday), but whenever I found an excuse to look outside the aerial highway was still busy.
פורסם על ידי Yoav Perlman ב- 8:03 PM